WHICH COLOR PASSPORT YOUR COUNTRY USE

Posted by : Aahil Shaik Monday, August 7, 2017
4 STANDARD COLORS OF PASSPORTS AROUND THE WORLD

Did you ever wonder why the passports around the world are limited to four colors red, green, blue and black, We will enlighten you the logic behind this, All over the world only this 4 standard colors or its shades used for their nationalities passports, However, Countries are free to decide their own colors. Recommend : Labor penalties on sponsor violations


Here is an exception of this colors, Canada's temporary passport is white in color, because sometimes more than colors look and uniqueness is also matter, Anyway their is no proper reason behind the white passport. United States tried all the four standard colors on their passports. Most viewed : Free sim for expats at Saudi Airport

- Almost all countries follow one of this 4 standard colors or its shades or its variations. We bring you here the logic or reason behind your nationality passport color.

The color symbolize life and nature, Most of the Islamic countries like Saudi Arabia, Pakistan, Bangladesh, Egypt, etc use green passports because of the importance of the color in their religion. Shades of green are also used by West African countries like Nigeria, Niger, Senegal, etc where the color indicates that they belongs to the Economic Community of West African States (ECOWAS). See Also : All airlines baggage allowances from or to Saudi

Countries with blue passport color are believed to belong the so called 'new world' league of nations, Countries like India, North America, South America, Australia, etc use this color on their passports. Read this : Penalties on Iqama violations

Red color is to be considered the communist movement worldwide, where their is a history of the communists or still in the influence of communists. Countries like China, Serbia, Lativa, etc uses red color on their nationality passports. Some countries use Red color or shades of red without any meaning in it. 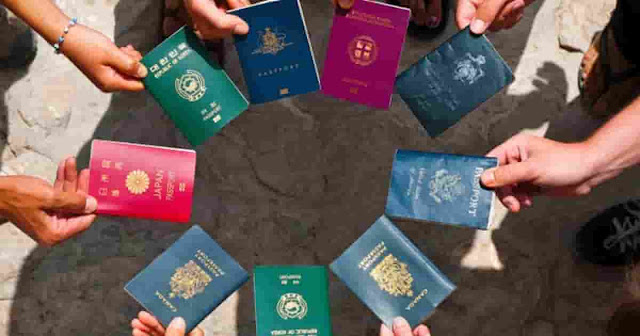