Remove Huroob or Absent From Work status in Saudi Arabia

Posted by : Aahil Shaik Friday, January 16, 2015
How to remove Huroob or Absent From Work status from IQAMA

Huroob will be imposed by sponsor or employer on employee iqama number if he is absent from work for a specific time. Once you got "Absent From Work" on your iqama, you became illegal in Saudi Arabia your iqama and benefits of employee is canceled. You will be banned for three (3) years from entering into Saudi Arabia. You can check your Iqama Huroob Stauts from Ministry Of Interior and Ministry of Labor websites of Saudi Arabia.

Legal ways to remove "Absent from work" from your Huroob Status :

The most hurtful words for Saudi Expatriates is "Absent From Work" in their Huroob status. You have only three legal ways to fight against or to remove it from your huroob status.

2. Approaching to Labor court for seeking remedy against illegal huroob. Normally deactivation of an escape report is not possible in this case once your employer made it. If you feel your huroob status is illegal you can approach it to labor court. But as you are runaway and illegal in huroob status, you cannot approach to labor court alone, You need to take a help of embassy or social workers and a known lawyer to submit a proof against your sponsor as he made illegal huroob against you.

3. Surrender to Jawazath, In this way you have to surrender yourself to authorities at Tarheel centers, Who will arrest you and keep you in jail and then deport you to your home country with a ban of 5 years from entering Saudi Arabia. 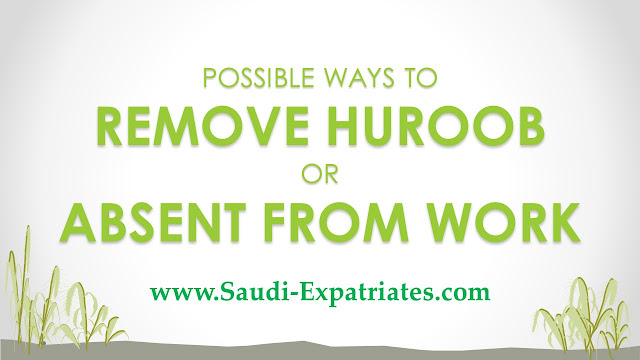