According to various local reports, These four women with unknown nationality were spotted palying board games in Masjid Al Haram on Friday around 11 PM near to King Abdul Aziz Gate. Recommend : Makkah to Madinah in 2 hours 10 minutes in Haramain train

- After spotting it, Authorities was alerted and the General Presidency's women section handled the situation by going to the women and requesting them to respect the sanctity of the holy mosque and stop the game, those women understood the situation and left.

- Muslims of all over the world have desire to live and get benefited with the few moments of the holy mosque Makkah Al Haram, they are eagerly waiting for their turn at least once in a life time. Related : Women arrested for posting improper content

- Social media users condemned the act of these 4 women and saying they should have respect the holy mosque. The holy mosque is for prayers, supplications and devotion and the visitors should ensure nothing else disturb it.

- While few social media users believe, it is similar to the use of smartphones in the holy mosque, It also should be stopped and concentrate on payers. Similar : No work for expats in gold shops

- One of the user of social media said smartphones should not be stopped from using, as it will help them for communicating with his family members or friends available in the mosque.


- The General Presidency of both Makkah Al Haram mosque and Madina Masjid Al Haram confirmed it had told the women not to play board game in the Holy mosques. Most Viewed : Saudi Tourist visas coming soon

- In the year 2015, A photo of youngsters playing cards inside Madinah Masjid Al Nabawi were spotted and the security authorities arrested them for the act. 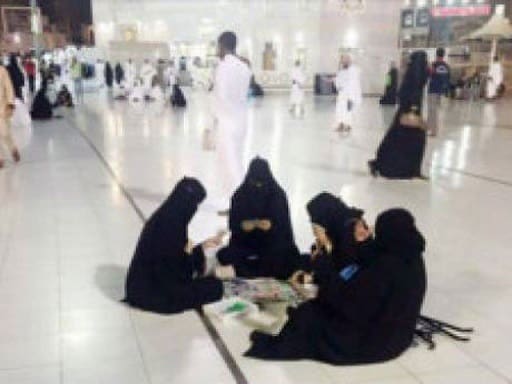