The Tourism Minister in Saudi Arabia, Ahmed Al-Khatib said that "Sindalah Island" will start receiving visitors during the first quarter of the next Year 2024, and 3 resorts will be launched at the Red Sea next year. See Also : The Line city in Neom

The Saudi Minister during his participation in the 2nd edition of Future Real Estate Forum stated that, "We signed with the private sector to build hotels in Riyadh at a value of 50 billion riyals until the Year 2026, also 700,000 hotel rooms will be built in Saudi Arabid by the Year 2030".
- Al-Khatib added that, the Ministry is also working to support and finance investors by 60% to develop tourism projects in the Kingdom of Saudi Arabia. He continued and said the Tourism sector in the Kingdom is very successful, due to the diversity of the Saudi Arabia's geographical and climatic topography throughout the year. Most Viewed : Diriyah - A tourist attraction in Saudi Arabia
Where is Sindalah Island in Saudi Arabia?
- Sindalah Island is located in the Red Sea on a total area of nearly 840,000 square meters, and it is one of a group of islands that will be developed in Neom, as per the different visions and designs that differs each island from the other.

- Sindala Island will include a charming and lively marina with 86 berths, making it an ideal destination to accommodate large boats and yachts, making it the main gateway to the Red Sea, which offers exception cruise experiences.
- Sindala Island is one of the most important and beautiful island in the Neom, will be the first destination for luxury marine tourism and yacht clubs on the Red Sea. Sindalah Island is located in Saudi Arabia within its maritime borders, in the Red Sea, southwest of the Tabuk region, near the Sinai governorate of Egypt, along the Egyptian Tourist city of Sharm el-Sheikh at its head. Read more : Sindala Island - The first luxury sea destination in Neom
- According to the CEO of NEOM, Nazim Al-Nasr, 20% of the Neom project's infrastructure has been finished and work is continuing to deliver the infrastructure to the areas ready for construction and it is proceeding as per the scheduled dates. 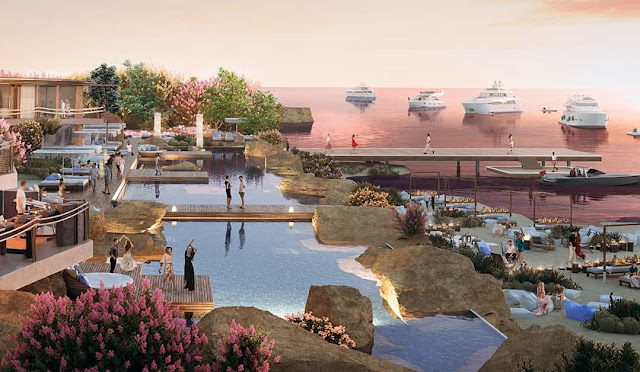