Penalty for publishing, printing Saudi Bank notes and for Trafficking in persons

Penalty for publishing, printing Saudi Bank notes and for Trafficking in persons

The Public Prosecution in Saudi Arabia confirmed that their is prohibition of printing, publishing or using a Kingdom's currency or part of a legally circulating paper currency, explaining that there are penalties for those who violates it. See Also : Now book Riyadh Zoo tickets online

The official Twitter handle of Saudi Public Prosecution through its tweet said, "It is prohibited to print, publish or use a currency or part of the face of a paper currency in circulation in the Kingdom of Saudi Arabia, with out getting a license or in violation of the restrictions and controls regulating that."
- The Public Prosecution (Nayaba Al-Aama) highlighted that the violators of such acts will be penalized with the jail term of a period of up to 1 year and a fine of up to 1,000 riyals. Most Viewed : Free bus service for Umrah pilgrims from Jeddah Airport to Makkah's Grand Mosque
- Earlier this, the Nayaba Al-Aaama reconfirmed that their is prohibition of trafficking in any person in any form in the Kingdom of Saudi Arabia.

- The Saudi Public Prosecution stated that, it is prohibited to traffic any person in any way, including coercion, threat, fraud, deception, kidnapping or abuse of position or influence.
- The authority said this also includes abuse of power over a person or exploitation of his vulnerability or providing or receiving sums of money or benefits to get the consent of a power who has control for the purpose of sexual assault. Trending : Soon, Saudi Airlines to launch the visa issuance service on purchasing its tickets
- Those whoever possesses things obtained from one of the crimes specified in the Law of Combating Crimes of Trafficking in Persons or conceals them, or spends them or hides one or more of those who participated in it, with the intention of assisting him to escape from justice with his knowledge of that or contributes to concealing signs the crime. 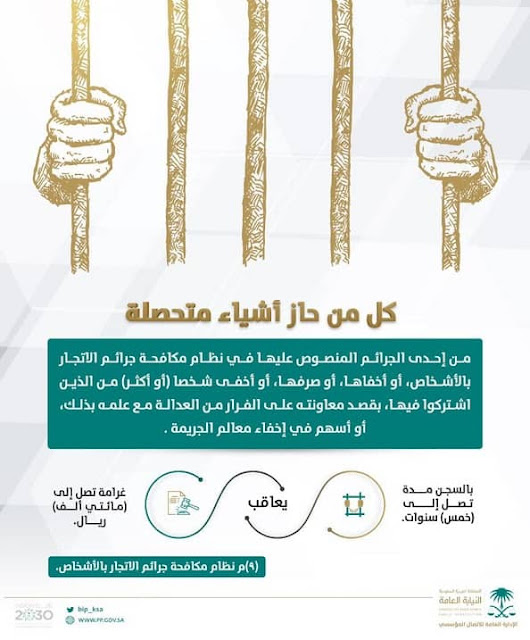