A wedding guest accidentally killed in Saudi Arabia after a celebratory gun firing from another man hit him, He was rushed to the local hospital after being hit by the bullet, where he pronounced dead. Related : Groom sued his friend for gifting 2 riyals as marriage present

The man whose bullet hit the wedding guest has no relation or connection with the family who were celebrating the wedding, Instead he was just accompanying one of the guest. Similar : Indian guy attends own marriage on a video call

- The family of the deceased man has been forgiven the gun man who accidentally fired the bullet, However police authorities refused to release him and now the case has been referred to the public prosecution.


- Saudi authorities have issued several warnings before also against the 'celebratory fire' in any kind of celebrations in the Kingdom of Saudi Arabia. Read : Saudi young husband is now young father

- Police officers are now tasked with monitoring wedding halls and venues can no longer be rented, unless a 'no celebratory fire' agreement is signed from the people who are renting. 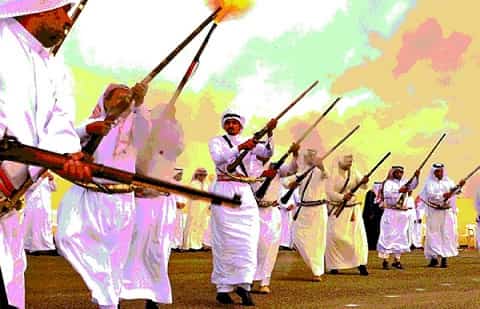