- Donald Trump is the only US President who made his first overseas trip with Saudi Arabia and other Muslim majority nations.


- After traveling through overnight flight with his first lady Melania Trump, The president of US Donald Trump was greeted by Saudi Arabia's King Salman at the airport. See Also : New Expats can get free sim from airport

- While the King Salman and the US President Donald Trump walking through the carpet, military jets swept in the sky be leaving a red, white and blue trail.


- Later Donald Trump was awarded with the Saudi Arabia's highest civilian honor golden medal (The collar of King Abdulaziz Al Saud), Just after few hours of landing in the Kingdom of Saudi Arabia. Read this : No expats allowed to work in government sectors by 2020

- Mr. Trump was honored for his efforts to strengthen the relationship between the Saudi Arabia and the United States and to enhance the security and peace between the region and around the world.

- Both the countries signed the agreements including a 110 billion dollars agreement of military equipment to Saudi Arabia which will expand up to 350 billion dollars in 10 years. You May Like : Shopping malls jobs reserved for Saudi's

- Saudi Arabia's oil giant Aramco is also signed 50 billion dollars deal with US companies. After the Saudi-US Summit it will be followed by GCC-US Summit and Arab Islamic American Summit. 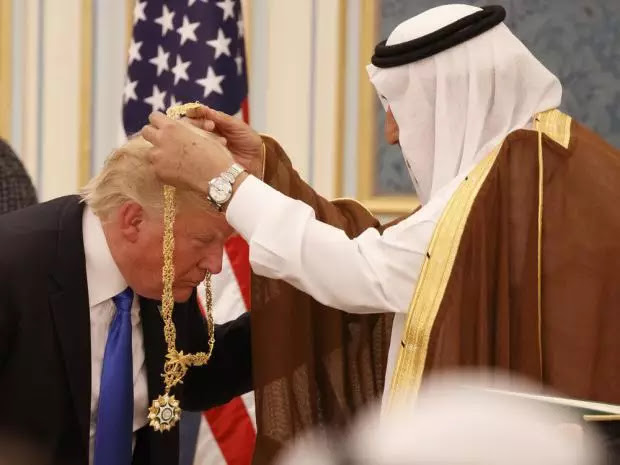