The Chairman of the General Entertainment Authority's (GEA) board of directors Mr. Turki bin Abdul Abdul Mohsen Al-Sheikh launched the identity of the 92nd Saudi National Day with a slogan "It is Our Home (Hia Lana Dar)", which will continue for 9 days in various regions of Saudi Arabia from 18th to 26th September.

Saudi National Day falls on 23rd September every year, all the regions of Saudi Arabia are preparing for major national celebrations, foremost of which are the majestic Air and Sea shows that will be carried out by the military and civil sectors with a group of fighter jets, helicopters, civil aircrafts, ships and boars in one of the largest Air and Sea shows witnessed in the national days under the slogan "A homeland Salute". To draw in the sky of the Kingdom a salute of pride, honor and belonging to the homeland, the wise leadership and Saudi people.
- For 10 days, the Royal Saudi Air Force is carrying out Air Shows with Typhoon F-15S, Tornado and F-15C aircraft in 14 cities. Trending : New sites of Gold and Copper ore discovered in Madina
- The Royal Saudi Naval Forces are participating in a national procession that includes military vehicles, a team of riders and a parade of its cavalry, in addition to a naval parade with modern naval pieces, in addition to a parade of the private marine security group boats and an aerial parade using helicopters.

- The Capital Riyadh and the city of Jeddah are witnessing a special event, represented by the launch of a procession and cavalry of the Royal Guard on a tour of the main roads, to form a majestic national procession that shares the joy of citizens, with the participation of the Saudi Royal anthem band and classic cars headed by the Royal Guard.
- Cirque Du Soleil presents a special show in one of its largest international solo shows, designed specifically for 92nd Saudi National Day, at the theater of Princess Nourah bint Abdulrahman University in Riyadh under the title "The Wealth of a Nation", for 4 consecutive days, from 21st to 24th September. See Also : Few unknown facts of Saudi Arabia
- Thirteen regions of Saudi Arabia host festivals that celebrate the Kingdom's history and authentic National heritage. It will be in parks and public parks, which will includes dozens of entertainment events, interactive activities, heritage shows and handicrafts, in addition to huge fireworks displays that will decorate the sky of 18 cities in various regions.

- The festivals include interactive platforms for performances equipped with the latest lighting and sound technologies to celebrate the heritage of the Kingdom through performances inspired by the folklore of each region.
- Prince Mohammed bin Abudlaziz Sports City in Madina will host the "National Operetta", which will narrate the country's history through the ages with impressive influences and techniques through innovative folkloric paintings, in addition to launching a historical exhibition accompanying the operetta highlighting the history of Saudi Arabia. Recommend : Saudi Arabia advances 5 ranks in United Nations Human Development Index
- Technically, a number of cities in the Kingdom will witness a series of parties to celebrate Saudi National Day in Riyadh, Abha, Qassim, Jeddah and Al-Ahsa. It will be revived by the stars of Saudi, Gulf and Arab music, as the artists Mohammed Abdo, Abadi Al-Jawhar, Rabeh Saqr, Majed Al-Mohandes, Ahlam, Angham and Ahmed Saad will sing. More details inside https://bit.ly/3Sge5Il. 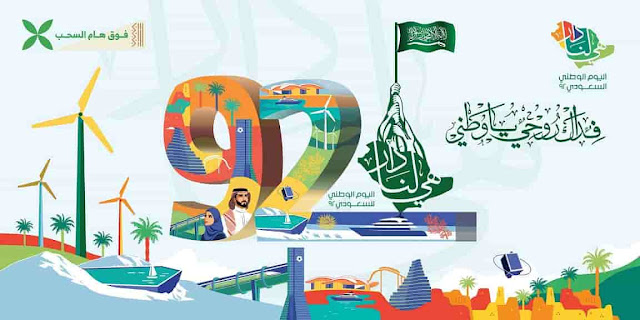