The Minister of Energy in Saudi Arabia, Prince Abdulaziz bin Salman said that the Kingdom have large quantities of uranium resource and which we would like to use commercially. Join Saudi Expatriates Whatsapp group

During his speech at Future Minerals Summit held in Riyadh, he added that, uranium resources will be dealt with in most transparency and we will search for appropriate partners.
- We will be bringing partners and we will use this resource and will be developing all the way to the yellow cake and will be commercially monetize that resource. Yellow Cake refers to a uranium concentrate powder that is obtained from intermediate processing of the radioactive mineral's ores. Recommend : Master plan of 75 billion Saudi Riyals to develop Jeddah DownTown
- Future Minerals Summit is Saudi Arabia's first mining conference, with the Kingdom having identified the sector as a major component of its Saudi Vision 2030 economic diversification roadmap.

- The Minister of Industry and Mineral Resources, Bandar Al-Khorayef, in the same context said that, the Kingdom of Saudi Arabia is keen to cooperate with various countries of the world to develop the mining sector.
- He explained that development should be in an effective manner and leave a great impact on peoples. Similar : We continuously need expats for our future projects - Saudi Crown Prince
- He added that, Mining by its nature exists in different places and cannot be limited to one place. So, mining investment must be implemented in a way that achieves the required returns and creates an impact on the society, as well as deals with the environment and environmental effects in a professional manner with the required extent.

- Al-Khorayef said the value of mineral resources in the Kingdom stands at more than 1.3 trillion dollars, such as phosphate and bauxite in the northeastern part, and gold, copper and rare land-based deposits in the Arabian Shield in the western part of Saudi Arabia. Related : Treasures buried in Saudi Arabia to provide 200,000 jobs 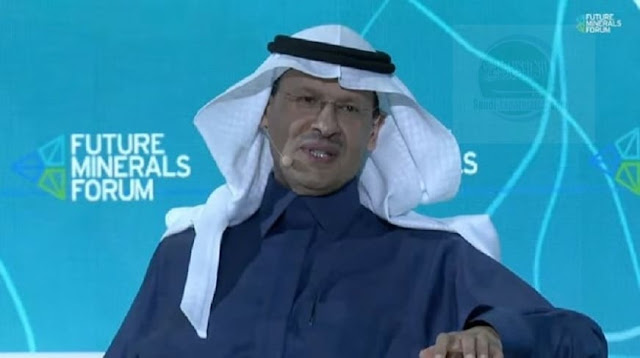