The joint field campaigns to follow up and control violators of the residency, work and border security regulations carried out by departments of security forces and Jawazat, which took place in all regions of the Kingdom, during the period from 13th to 19th January 2022, leads to arrest 13,780 violators. Download Saudi Expatriates App for Android

1. The total number of violators caught during the inspections all over the Kingdom amounted to 13,780, of which 6,895 are the violators of residence law, 5,123 violators arrested for the border security regulations, while 1,762 expats arrested for violating the Saudi Labor Law.
2. A total of 391 violators were arrested while trying to cross the border into the Kingdom, Of them 62% are Ethiopians, 30% Yemenis and 8% belongs to other nationalities, while 36 people were arrested while trying to flee out of the Kingdom from the border . Trending : No split payment allowed for arrears of work permit, expat levy, dependent fee
3. A total of 26 people were arrested who were involved in transporting, operating and providing shelters to the violators of residency, work and border regulations and covering them up.

4. The total number of violators, who are currently subject to punitive measures, accounted to 95,650 of which 85,243 are men and 10,407 are women.
5. Total of 84,072 violators were referred to their diplomatic missions to get travel documents for deportation, 2,947 were referred to complete their travel reservations and 6,728 violators were deported. Similar : This is the first Arab city to adopt 3 days off in a week
- The Ministry of Interior in Saudi Arabia confirmed that anyone who facilitates the entry of violators of the border security system into the Kingdom, or transports them within it, or provides them with shelter, or provides them with any assistance or service in any way will exposes them to below penalties.

- Imprisonment of up to 15 years, a fine of up to 1 million riyals, and seizure of the means of transportation and housing used for shelter, in addition to defaming it, and made it clear that this crime is one of the major crimes that require arrest, calling everyone to report any violation cases to the number 911 in the regions of Makkah and Riyadh, and 999 and 996 in all regions of the Kingdom. See Also : Steps to object violations of precautionary measures through Absher 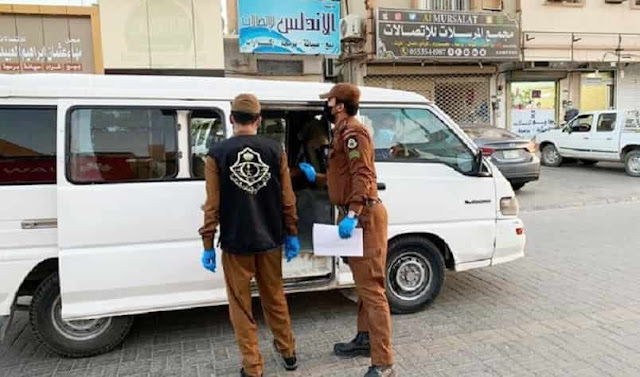 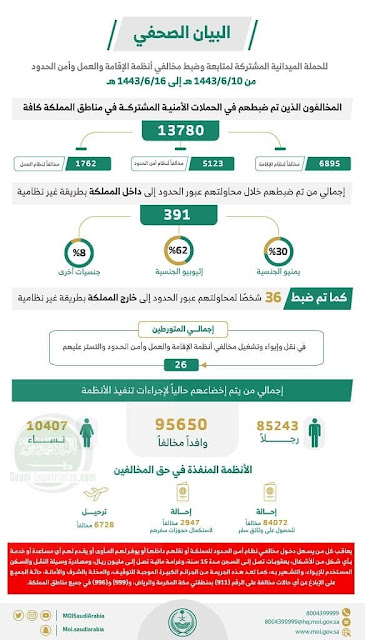