Posted by : Aahil Shaik Friday, June 19, 2020
About 1560 Mosques to open their Doors for Worshipers in Makkah from Sunday

The Ministry of Islamic Affairs in Makkah has prepared the mosques, where all precautionary measures will be implemented, in preparation for the opening of 1,560 mosques to receive worshipers starting from Fajr prayers from Sunday (21st June), after a break of 90 days, due to the emerging Corona virus. Trending : Saudi Arabia's all regions except Makkah returning to Normalcy from 21st June


Several volunteers participated in the initiative to "prepare mosques" to support the efforts of the concerned authorities to equip mosques for worshipers in the neighborhoods of Makkah Al-Mukarramah, according to the precautionary procedures and instructions set by the Ministry of Islamic Affairs, Dawah and Guidance and the Ministry of Health.

The services agency, represented by the General Administration of Social Services, Municipal Volunteer Administration affiliated to the Municipality of the Holy Capital Makkah. Related : Lifting Curfew partially in Makkah from 21st June

- In cooperation with the branch of the Ministry of Islamic Affairs, Dawah and Guidance in the Makkah Region, work to implement the precautionary measures, which were to put stickers with social spacing between worshipers and the lifting of the Qur’ans, within the framework of an integrated program within the preventive measures and precautionary measures to limit the spread of the Corona virus. 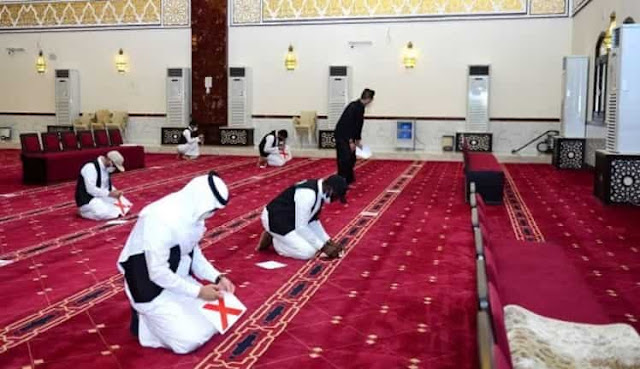