Saudi Arabia has arrested around 34 people from different parts of the Kingdom who violated curfew and health measures that has been taken to prevent the spread of the novel Coronavirus, according to the report of Saudi Press Agency. Recommend : Expats prefer to be in Saudi Arabia during Coronavirus


Riyadh Police arrested 2 citizens appeared in a viral video in violation of the curfew order and driving recklessly in a residential neighborhood, in addition to causing panic in the neighborhood by firing gunshots in the air.

- Arrested another citizen who called insulting words for the residents of a governorate, one resident arrested from the displaced tribes, driving his vehicle without plates and show off about his exit during the curfew. Trending : Free home delivery of medicines a new initiative from Saudi Post and Health Ministry

- Asir police arrested a woman after she appeared in a video driving a car during the curfew, she recorded the clip and posted it online.


- The security authorities in Qassim Region managed to arrest a number of delivery representatives from electronic applications while transporting people inside their vehicles and try to hide them while passing through various checkpoints. See Also : 10,000 SR fine for violating workers Housing rules

- Three expatriates of Bangladeshi nationality who brought a barber to their place of residence in violation of preventive and precautionary measures.

- Jazan Police arrested expatriates of Pakistani nationality who prepared their residence place for shaving after suspending barber shops activity in all regions.


- Two expatriates of Yemeni nationality are arrested, who violated the curfew and went out during the time of the ban by hiding one of them inside a carton and the other documenting that.

- In the Eastern Province, A Saudi citizen who documented his violation of the curfew order was arrested, he was showing off about it and encouraging the other residents of Hafar Al-Batin to do the same.

- Legal procedures were taken against them and some of them were transferred to the Public Prosecution. Violations of the curfew in the Kingdom are punishable with a fine of 10,000 SR and doubling the fine for repeating it, including a jail term of 20 days. Read more : Curfew violation fine in Saudi Arabia 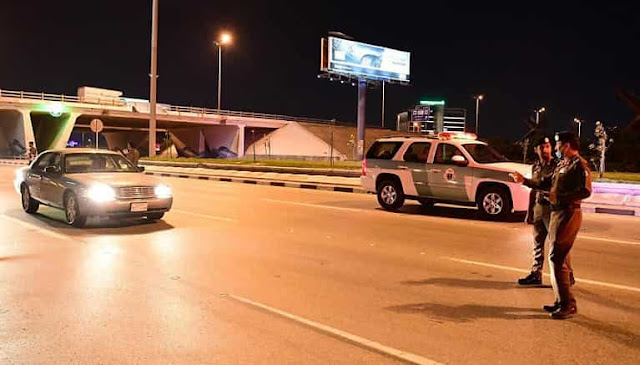