Definitely, You are not the only one in Saudi Arabia, who received fraudsters scam message or call about winning prize money or lottery, Do not fall as victim for these scammers, there is no truth in such type of calls or messages, it is 100 percent fake.


Telecom operators, police officials and media reports already warned to not believe and fall as victims to such fraudsters messages and calls. Those who blindly believed and responded have lost huge amounts of money.

- Mostly expatriates are becoming the target of such scams, The latest victims of this fraudsters are two Indian women who are working in Southern city and they lost about 13,000 Saudi Riyals for believing and trusting these fake messages.


- According to the latest two Indian victims, They received separate calls through a calling mobile app from a stranger who told them they had won 2 million Saudi Riyals as a lottery. The guy on the phone asked them to provide their bank details and OTP (One Time Password) in order to claim the prize money.

- Even though the women were well educated they fell for this scam, The victims are working as nurses in one of the leading hospital in Abha. These two women gave the bank details to the caller who spoke with them in Urdu language.

- One women lost about 7000 Saudi Riyals, while the other women lost 6000 Saudi Riyals, These balance was used to pay SADAD bills for a data SIM which was used in other foreign country. These smart scammers are experts in GSM technology, They are targeting different victims without leaving any trace.

- Many people are receiving such messages and calls from various registered numbers through Whatsapp messages and calls, which claims the receiver had won a prize of 200,000 Saudi Riyals or 500 grams gold, The scammers using the names of STC, Mobily and Lulu Exchange for the fraud.

- Earlier, Jeddah police has raided den in mountainous area of east Jeddah and arrested 12 Pakistani nationals who involved in such lottery fraud, Police had found 58 sim cards and mobile phones devices buried at the place.

- In other case, Police in Riyadh arrested a Bangladeshi with 150 registered sim cards with various telecom operators in the Kingdom. 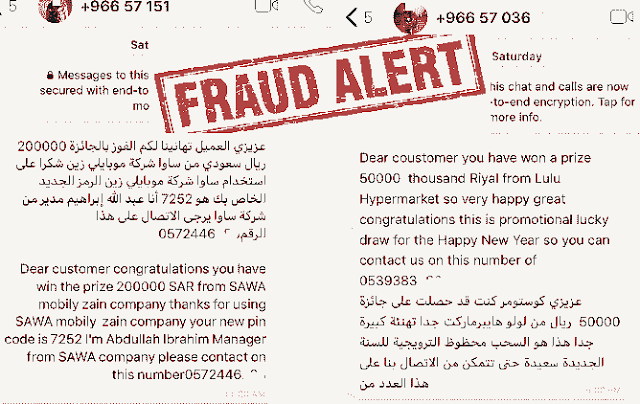