The Kingdom of Saudi Arabia has just banned Careem and Uber private taxi services from picking up passengers at domestic and International Airports, It is a traffic violation and violators will be punished as per the statement of General Directorate of Traffic. Trending : Taxi rules in Saudi


Not only Careem and Uber, Any similar services or Saudi citizens who are using private vehicles for picking up passengers from the Airports also banned in the Kingdom of Saudi Arabia, But drop offs to Airports still available. Most Viewed : New penalties for traffic violators

- Illegal drivers who found transporting passengers from or to Airports will also be punished as per the Traffic Department. Similar : Flight delay compensation as per GACA


- Airports have their own taxi rules for operating taxis from Airports under the GACA(General Authority of Civil Aviation). Recommend : Expats not allowed in Uber and Careem

- Saudi Arabia has a investment of 3.5 billion dollars in Uber on June 2016, While STC(Saudi Telecom Company) invested 100 million dollars in Careem on December, which is 10 percent of Careem.


- The Kingdom vision 2030 brings more women workers about 1.3 million in plan, In which Uber and Careem will give a lift. 80 percent of passengers in Uber and Careem are women, As they do not have driving option in the Saudi Arabia. Related : Get free 20 SR credit in Careem

- Earlier government asked Careem and Uber to provide more jobs to Saudi nationals and not allow any expatriate to use his private taxi for this service, Unless his sponsorship is under Uber or Careem. See Also : Airport Building tax on Saudi tickets 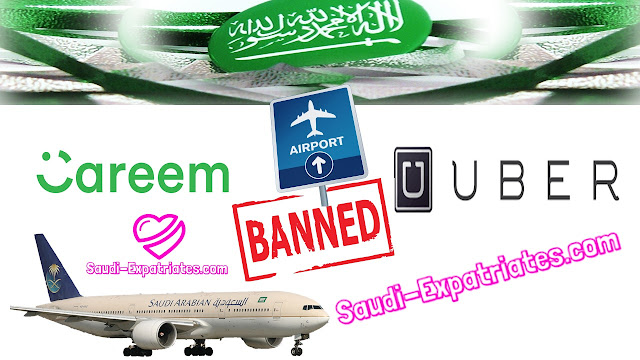