WORKERS BANNED FROM WORK UNDER THE SUN

Like every year, This year also Saudi Arabia's Labor Ministry and Social Development banned workers from working under the sun in between June 15 and September 15. It is employers duty to make sure that their workers will not be allowed to work in the summer season specially in noon between 12 PM to 3 PM. Recommended : Ministry is planning to appoint labor attache's in various countries


- Within less than a month (From June 15 to July 12) of the year 2016, Ministry Of Labor and Social Development filed 258 violations from 241 companies, Who let their employees to work under the hot sun. Similar : Probation Period for employees as per Saudi Labor Law 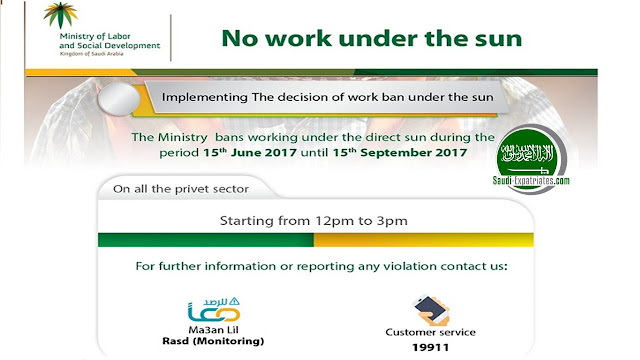 - Oil and Gas workers and the areas with low temperatures are exempt from this condition, However measures will be taken to protect them from the heat of the sun, Said by Fahad bin Al-Awaidi, Ministry's Undersecretary for inspection and improvement of the work environment. Related : New amendments of Saudi Labor Law


- Some areas of Saudi Arabia, which experiences low temperatures will be exempt from rule, However there would be coordination of weather check from the with the secretariats of different regions. See Also : Employers who did not provide medical insurance to employees will ban from getting new visa's

- Here workers are referred to labors and outdoor workers, they are applicable under this rule specially in summer season between 12 PM to 3 PM.


- Ministry of Labor is trying to make safe environment for workers and to prevent from injuries and accidents to them, which may also affect the company productivity. You May Also Like : Check Criminal Activity Report of your Iqama online


- This piece of news was earlier published in Arab News and Saudi Gazette news publications. 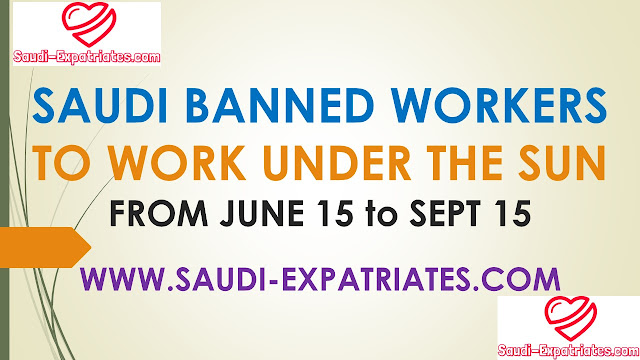