PROPOSAL OF 6% TAX ON EXPATS REMITTANCE

Saudi Arabia's finance committee of Shoura Council proposed a expatriates tax on your remit by 6% for the first year and it will slowly reduce to 2% permanently from the 5th year onward. This is the way to force expatriates to invest and spend their money in kingdom of Saudi Arabia. Trending : No remittance tax on expats


- There will be limits on expatriates for sending money remittance abroad in a given time and there will also be separate limits for transferring money if an expatriate is going on final exit.

- Limits for sending money abroad through money remittance centers will be calculated based on the income of the expatriates as per their salary certificates.

- This remittance tax will be applicable on all money transfers of expatriates whether it is personal or official or deposited for special government account or for any financial institute. 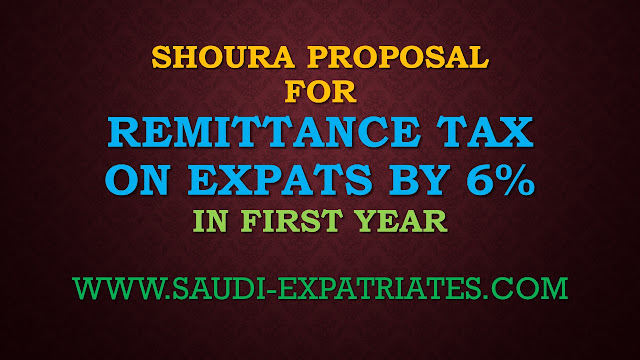 - Several measures are going to introduce on those who prevents from paying remittance tax or who fails to pay and resolve their tax disputes. This news was published on Arab news earlier a day.


- In case of failed to pay tax, First time you need to pay the actual tax rate and then it will be doubled for every violation you make.

- Citizens will be penalize or fined, if they try to help expatriates by submitting fake salary certificates of their workers or employees.

- This proposal of tax was drafted from Hossam Al-Anqari, The head of General Auditing Bureau and a former shoura member.