150 RIYAL FINE FOR EATING WHILE DRIVING

PENALTY OF 150 SR FOR EATING WHILE DRIVING

Traffic directorate imposed a ban last month (Dec 2015) on eating and drinking while you are driving any type of vehicle in Saudi Arabia. If caught by traffic authorities or any traffic official you will be charged a penalty of 150 Saudi Riyal.


Traffic authorities in Saudi Arabia launched many rules of the road as safety campaigns for the awareness focusing drivers and travelers. Various surveys pointed Saudi Arabia has the most dangerous and deadly accidents in Arab countries with an average of 17 people deaths in a single day. Recommended : Driving License in KSA 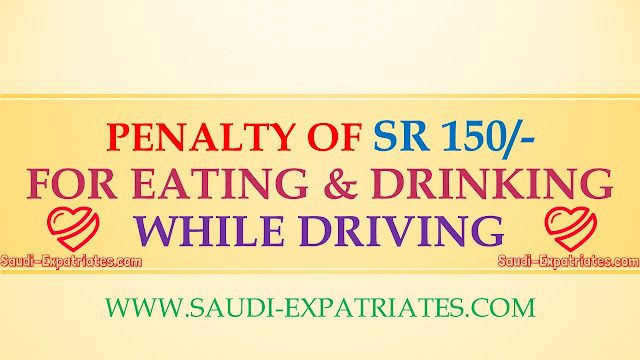 As per the past surveys and records in Kingdom of Saudi Arabia you must be careful while you are riding a vehicle and should follow the traffic safety rules of the road.


- Most of the accidents are happening because of eating and drinking while driving, So if you have a vehicle, You must follow this rule for your and your family safety. SR 150 penalty fine from traffic authorities may alert them for changing this habit. Recommended : Renew Driving License

- Texting and sending whatsapp messages while driving is more susceptible for accidents than who do not use smart phones or whatsapp texting and messaging service while driving. Recommended : Renew driving license online

- Having Coffee and Tea while driving is in the top of most dangerous foods and beverages while riding a vehicle.


- Drivers should obey the rules of following the red light and do not overtake from wrong side of the road, etc,. If you are driving for a long ride, Take a proper sleep and rest before you start your journey. Recommended : Check traffic violations