The city of Riyadh to witness the launch of "Riyadh Space Fair (Exhibition)" on Sunday (22nd January 2023), which is organized by the Royal Commission of Riyadh city, in partnership with the Ministry of Education, the Saudi Space Authority, King Abdulaziz City for Science and Technology and King Salman Science Oasis.

The Riyadh Space Exhibition, under the theme of "Man and Space", will held at the headquarters of the King Salman Science Oasis in Al-Raed district on King Abdullah Road and last for 30 days, starting from 22nd January 2023 until 20th February 2023.
- The exhibition offers live educational and interactive experiences that allows visitors of all ages to learn directly about space science and its discoveries. By depicting the relationship between Man and the Universe, assisting in the exploration and knowledge of space's secrets throughout time, and learning about the great accomplishments that made a significant difference in human understanding. Recommend : Now you can book your Riyadh Zoo tickets online
- The Riyadh Space Fair features 8 live experience stations that are packed with knowledge and suspense, as it takes visitors on a journey to explore the advancement of Astronomy, Cosmology, and a number of Contemporary Scientific theories about the nature of the universe.

- This will be executed through the use of entertaining educational games, interactive simulators, like "walking on Mars," and hands-on activities that let visitors experiment with tools used to study the universe, such as telescopes, satellites, etc.
- The Riyadh Space Fair unites science with entertainment, enhancing the scientific and cultural lives of Riyadh residents and tourists, accomplishing the desired growth in this sector, and opening up other opportunities. as per the goals of the "Saudi Vision 2030" for its employees said Eng. Khaled bin Abdullah Al-Hazani, the supervisor of the lifestyle sector at the Royal Commission of Riyadh. Most Viewed : Diriyah - A tourist attraction
- Space science is one of the most important fields that draws a lot of attention from people of all ages, especially the younger generation, according to Eng. Khaled Al-Hazani. In order to give our children and all visitors the chance to get intimately familiar with space science, the first version of the exhibition was prepared.

- The Riyadh Space Exhibition features events and activities appropriate for all age groups and conducts educational experiences through entertaining ways rich in information in this field. This helps to uncover new talents in this years science and is in line with the Kingdom's ambitions to become a world leader in the field of space science. Join Saudi Expatriates Whatsapp group
- The Riyadh Space Fair to open its doors daily from 10 AM to 10 PM, starting from 22nd January to 20th February 2023. Visitors can book their tickets online at https://riyadhspacefair.com/en 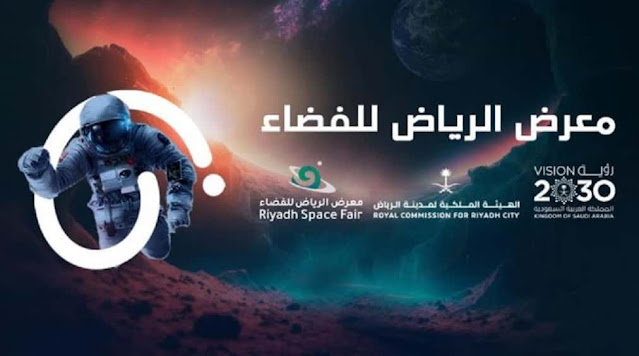