Saudi Crown Prince and Chairman of the Board of Directors of NEOM, Mohammed bin Salman announced the establishment of the NEOM Industrial City “Oxagon”, the largest floating industrial complex, which adds another step within the NEOM city master plan, and aims to provide a new model for future manufacturing centers as per NEOM’s strategy of redefining the way humanity will live and work in the future. Most Viewed : Saudi Crown Prince announced world's first non-profit city

The Crown Prince stated that "The industrial city "Oxagon" will be a incentive for economic growth and diversification in NEOM in particular and the Kingdom in general, which meets our ambitions to achieve the goals of Saudi Vision 2030."
- "NEOM Industrial City will contribute to redefining the world's orientation towards industrial development in the future, along with its contribution to protecting the environment, creating new job opportunities and achieving growth. Oxagon will also participate in supporting the Kingdom in the field of regional trade, in addition to supporting the flows of global trade in the region", he added.
- Oxagon occupies a large area in the southwest corner of NEOM, and the basic urban environment is centered around the integrated port and logistics center that will house the majority of the industrial city’s population. To support NEOM's approach to preserving 95% of the natural environment.

- The city also constitutes the largest floating structure in the world and is a center for NEOM's development of the "blue economy" by relying on the seas to achieve sustainable development, which reflects NEOM's focus on creative and innovative development.
- Through “Oxagon” industrial city, NEOM will feature the world’s first integrated supply chain and port ecosystem, where the operation of port, logistics and rail delivery facilities will be standardized, providing global productivity levels with zero carbon emissions, and integrated physical and digital supply chain and logistics will allow safe delivery On time, ensuring efficiency and cost effectiveness for industry partners. See Also : 'The Line' project in Neom, A plan city of future
- The industrial city of Oxagon relies on the most advanced technologies like Internet of Things (IoT), human-machine interaction, artificial intelligence, predictability, and robotics, all coupled with a network of fully automated and independent distribution centers serving NEOM's ambitions to create an integrated, effective and intelligent supply chain.

- The industrial city of NEOM constitutes a center for clean and advanced industries, where net zero emissions, through working with 100% clean energy, will become a focal point for industry leaders who want to lead change to create advanced and clean factories in the future.
- The industrial development of the city is based on 7 sectors, with continuous care for innovation and new technology that creates a vital base for these industries. These industries center on sustainable energy, independent mobility, innovation of water solutions, sustainable food production, health and well-being, technology and manufacturing, digital (including communications, space technology, and robotics), modern construction methods, which are all powered by 100% renewable energy. Recommend : GACA in Saudi Arabia plans to operate some airports using only renewable energy

- The city will adopt the Education, Research and Innovation (ERI) ecosystem to compete with existing global centers. The industrial city is also being developed in a distinctive way, with designs for large manufacturing facilities, including the largest green hydrogen project in the world. Scientist that includes Air Products, ACWA Power, and NEOM in a three-way joint venture. As well as the world's largest and most advanced modular building plant with Gulf Modular International, as well as the largest hyperscale data center in the region, a joint venture between NEOM and FAS Energy.
- With best in class regulatory standards and extensive support, the industrial city is set to grow rapidly, welcoming industrialists, investors and business owners at the beginning of 2022. Follow Saudi Epxatriates on IMO

OXAGON is the place where ideas can change the world 🌍.
Like nowhere else on Earth, this pioneering cognitive city is changing the optic on business, industries and livability 🏡. @NEOMOXAGON#NEOM #OXAGON pic.twitter.com/gGdchvOpNb 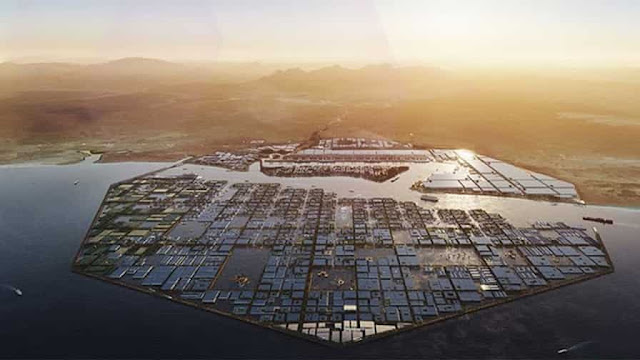