The President of the General Presidency for Affairs of Two Holy Mosques, Abdul Rahman Al Sudais has launched a smart robot to distribute bottles of Zamzam water bottles without contact as part of an effort to limit the spread of Corona virus.

Al-Sudais explained that modern technology is being used to serve humanity, especially in light of the outbreak of the Corona pandemic, which helps, God willing, will preserve the safety of worshipers of the two holy mosques.
- He praised the modern science and digital development in the service of all mankind, where the robot distributes the packages without contact and without hindering the worshipers movements in the two Holy mosques. Trending : Registrations for Hajj 2021 started in Saudi Arabia until 23 June
- Earlier this, 10 smart robots were launched to support sterilization efforts in the Grand Mosque. The robots operate according to an automatic control system at 6 levels, ensuring the safe healthy and environmental atmosphere and smart analysis of sterilization needs.

- The battery charged robots can operate for 5 to 8 hours each without human intervention.
- The internationally certified robots are part of automatic sterilization system in effect at the Grand Mosque to protect Umrah pilgrims and worshipers from Covid-19. See Also : Hajj 1442 is limited to 60,000 people in Saudi Arabia (Citizens and Expats) 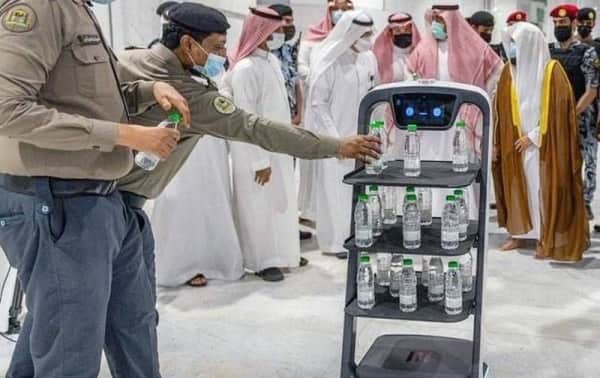