Authorities in Egypt have discovered 13 coffins believed to contain the remains of human mummies which were buried more than 2,500 years ago. The coffins with complicated paint and unopened were discovered in a burial well at ancient site of Saqqara, 20 miles away from Cairo.

Egypt's Ministry of Tourism and Antiquities said the coffins were stacked one on top of the other and it buried nearly 40 feet below the ground. The coffins were so well preserved as its original design and paint were still clearly visible. Most viewed : Gradual resumption of Umrah soon
- The 13 coffins were found just as the Egyptian government reopened its museums and archaeological sites for public after a long close due to the coronavirus pandemic.
- Khaled El-Enany, The Minister of Tourism and Antiquities tweeted "An indescribable feeling when you witness a new archaeological discovery, stay tuned for the announcement of a new discovery in Saqqara". Recommend : Full details on lifting travel restriction for entries and exits of Saudi Arabia 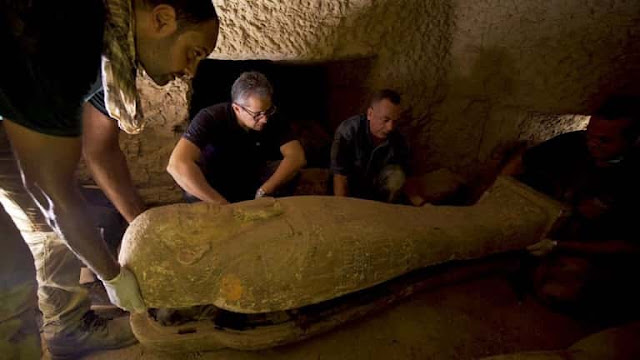