A video of Saudi woman working in a barber's shop gone viral on social media, She says in the clip, she is a Saudi national and she is the first Saudi woman to do this job.

She works at a barber's shop and serving the children only in Taif in Western Saudi Arabia, She said whatever this work is and to depend on themselves from earnings of their jobs. Trending : Egypt discovers 13 coffins of 2500 years old Mummies
- The viral video shows, A face masked woman cutting the hairs of a child, while a man and woman recorded the clip with mobile phones in a gesture of admiration. The man in the video heard saying to woman barber that 'You are a symbol and pride of Saudi Arabia'.
- After the video gone viral, she said, she has received positive as well as negative reactions on social media, she explains that she works as an employee in a shop located in one of the commercial complexes in Taif. Most Viewed : Gradual resumption of Umrah soon
- She said the shop is dedicated for only children up to 10 years, the child appearing in the viral clip was accompanied by his parents, she added. 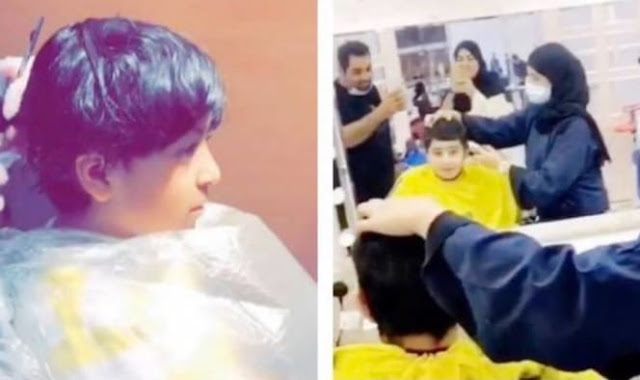