The Haramain high-speed train project management reported that a fire broke out this evening, Thursday, in a number of temporary offices of the contractor (mobile portals) in the Sulaymaniyah district in Jeddah, which are empty of employees.


This came in a statement by the project management, stressing that the civil defense completely controlled the fire, without recording any injuries or loss of life.

The project management extended its thanks and appreciation to the Civil Defense and its employees for their great and distinguished efforts in extinguishing the fire with high effectiveness and efficiency.

For his part, Colonel Mohammed bin Othman Al-Qarni, media spokesman for the Civil Defense in the Holy City of Makkah, explained earlier that the Unified Operations Center in Makkah Al-Mukarramah Region (911) received a notification at exactly (19:27) Thursday evening, that there was a fire In the yard of the Haramain train station.


"Al-Qarni" added that upon receiving the communication, the necessary teams, ladders and supporting equipment were moved to the site, noting that with the arrival of the teams, it became clear that the accident was a fire that broke out in a number of barracks taken as administrative offices in the square of the Al-Haramain Train Station in the Sulaymaniyah district.

Al-Qarni confirmed that the teams worked to contain the accident at its site without spreading to neighboring sites reports Ajel. 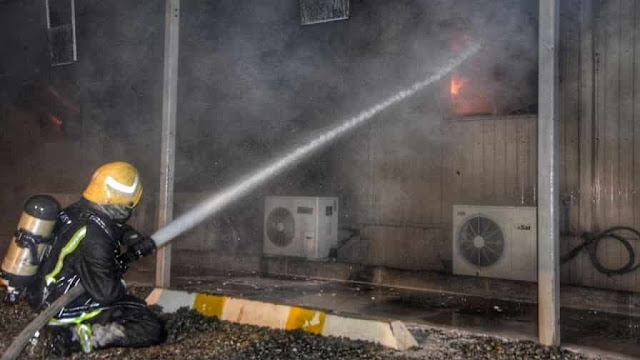