Video : Missing Saudi citizen found in the Middle of the Desert in 'Sujood' Position

Posted by : Aahil Shaik Friday, July 24, 2020
Video : Missing Saudi citizen found in the Middle of the Desert in 'Sujood' Position
A rescue team of Saudi Arabia found the body of a citizen in the middle of the desert in Riyadh region in 'Sujood' position, he had gone missing 4 days ago, had his palms and forehead on the sand as he was in deep supplication.

The 40 year old citizen, Dhuwaihi Hamoud Al-Ajaleen was found after police launched an intensive search for him, in the middle of the desert in Riyadh region. he gone missing from his home in Riyadh's Wadi Al Dawasir.
- Rescue teams drove through the desert in finding of Al Ajaleen a few meters away from his car, Videos of the rescue team finding the man and his car, it was stocked with sticks indicating he was gathering wood, went viral on social media, promoting hundreds of users to pray for him online.

- The family of the man filed a missing person report with Wadi Al Dawasir police station after losing contact with him, The Saudi rescue team launched a search to find him, who was using a pickup truck.
- The search teams then intensified the search for him using 4 wheel drive vehicles and gliders to expand the scope in the rough areas and sand dunes, then his body found few meters away from his car. 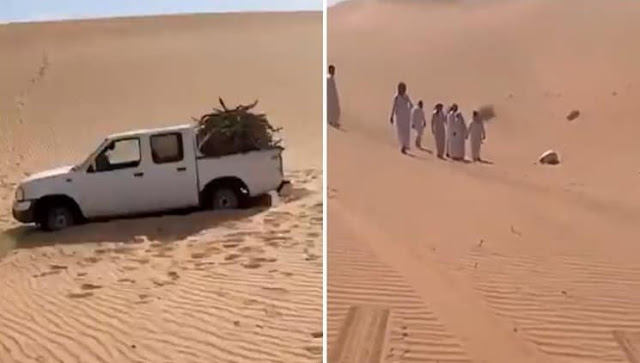