Video : Saudi Police arrested a Man in Makkah for riding a Camel on the Road

Posted by : Aahil Shaik Friday, July 24, 2020
Video : Saudi Police arrested a Man in Makkah for riding a Camel on the Road

A video of  a man in uniform riding the camel in the holy city of Makkah in Saudi Arabia went viral on social media. As it is unusual sight on the roads many motorists took video and posted it online.


The Security police investigated the case and found a man who is about in his 40s and suffer from psychological disorders said the Makkah police spokesperson, Major Mohammed Al Ghamdi.

- The man underwent a medical test in preparation for competing disciplinary procedures and found to be psychological disorder.

- The viral video shows a security man on a camel, which astonished many online on social media, few users claimed that 'A soldier in Makkah is riding a camel' as the petrol becomes expensive wrote some people on social media.


- Saudi police had arrested the man on camel after he had been seen riding the camel from Makkah's district of Al Zaher to the district of Al Azazia.

- The viral video clip shows the man is seen quietly riding the camel even after the public around him is surprised by the look. 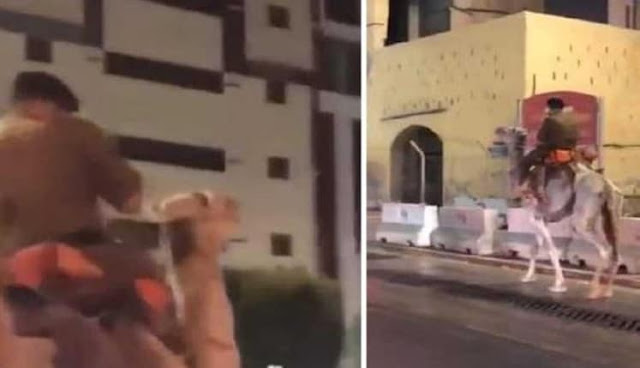