Swarms of Locusts invade in some regions of Saudi Arabia

Posted by : Aahil Shaik Friday, February 21, 2020
Swarms of Locusts invade in some regions of Saudi Arabia

Saudi Arabia's some regions infested by millions of locusts recently after the heavy good rains in the regions, It is expected the similar infestations to continue for the next few months.


The Municipalities in the Kingdom has sent several workers in various areas to disinfect the areas and the streets of the cities in order to get rid of locusts and swarms.

- The Ministry of Environment in Saudi Arabia has warned that the swarms are expected to continue to invade Saudi Arabia for at least 2 months, It called its citizens and expatriates to avoid eating any of the insects as they are contaminated by toxic pesticides. Similar : Madina's Grand Mosque infested with black swarms

- The pictures and videos of the swarms in some regions of Saudi Arabia are now viral in social media. The Locusts will multiply during rains and rough weather. Eriteria, Ethiopia, Sudan, Yemen, Oman, Somalia and Saudi Arabia are famous for locusts.

- Locusts have arrived in the Kingdom from nearby countries especially from the East Africa, Red locusts can be wild as they will eat crops. Combat teams are working and using spraying aircraft in some irregular areas. All the toxics are approved by the Food and Agriculture organization. See Also : Specialized teams to study the sudden appearance of swarms and locusts in Saudi Arabia

- The swarms already attacked in some regions of Saudi Arabia especially in Jizan, Asir, Al Baha, Qunfodah and Makkah. As the environmental conditions in these Saudi regions allowed the locusts to mature quicker and lay eggs. 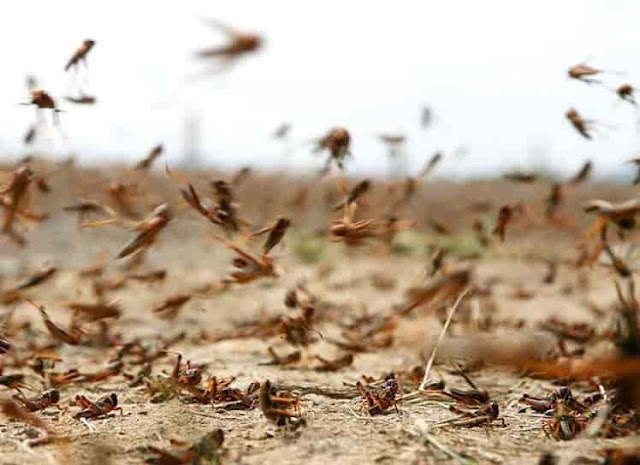