Posted by : Aahil Shaik Monday, December 23, 2019
Video : Tiger attacks man at Riyadh Zoo in the Capital city of Saudi Arabia
A man has luckily survived after a tiger jumped on him in in Riyadh Zoo of Al Malaz district on Sunday, The man seems to be a Sudanese national and its not clear how this man entered the tiger's enclosure area. Trending : Riyadh zoo timings and entry fee
The viral video on social media shows a man lying on the ground and being attacked by the tiger, A security officer saves the man by firing a medicine shot to reduce tension or anxiety of tiger. See Also : Biggest park in the world planned in Saudi Arabia
- The man was taken to the hospital with injuries in the neck and feet, According to the local sources, he is in stable condition. Some sources claimed the man pushed himself into the site for no clear reason. 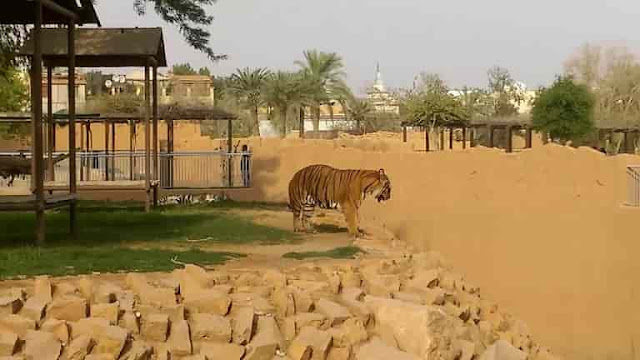