The Municipality of Makkah in Saudi Arabia has finished coating 3500 square meters of area in the holy sites pedestrian pathways in a bid to give some rest to pilgrims from high temperature. Trending : Saudi Arabia to issue temporary visas for some expats soon


In the 1st phase of the cool project it covered the coating of a pedestrian road at Mina gate leading to the Jamarat area. The project is implemented in cooperation with the Japanese corporation Sumitomo. See Also : Kaaba Kiswah raised up from the ground for Hajj

- The aim of the project is to reduce the surface temperature of the walkway in the Shuaibin area, there is a possibility to include the Jamarat area and coat several pedestrian pathways at holy sites.


- The special cool coating will help in reducing the temperature by 15 to 20 degree Celsius, The temperatures will be recorded every 10 seconds during the Hajj season using special sensors installed under the asphalt. Read : 8 million copies of Holy Quran and its translations to the Hajj pilgrims

- The project came after finishing a network pedestrian pathways extending from Jabal Al Rahma in Arafat to Mina passing through Muzdalifah.

- The cool coating aims to ensure the comfort, safety and security of pilgrims while they are moving in between holy sites for performing their Hajj rituals. THe pathway has been covered using tiles and benches are placed on both sides for pilgrims to rest.

- The pathway is lit using LED beams, which are very bright and cost efficient compared to the ordinary lights and low emissions. 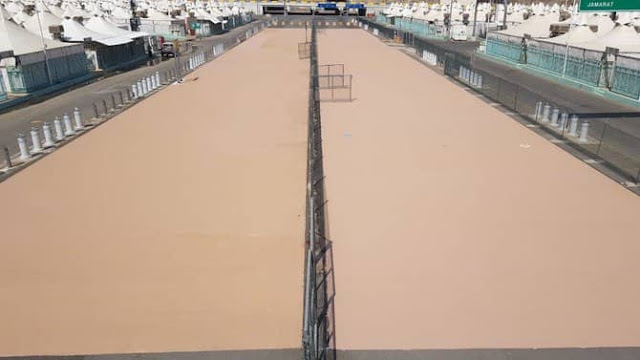