A Saudi father has been appreciated online for forgiving his son's killer in the Kingdom, minutes before the execution of the killer. Recommend : Man arrested for trying to open the door of Kaaba


A man was saved from a terrible fate after the father of his victim decided to pardoned the killer just minutes before he was about to executed in an open field. Similar : Saudi man forgives his killer before passing away

- The father was identified as Mohammed bin Dawas Al Baladi, According to a viral clip on social media, people are seen cheering and carrying the father of killed son on their shoulders and paraded him around for his benevolent act.


- Even security guards are glad to witness the rare situation, The killer was convicted for murdering Al Baladi's son in Rabigh governorate of Saudi Arabia.

- Netizens lauded the decision of the victim's father for giving a second chance to the killer. Read : Saudi ministry denied rumors on expat levy fee

- Last year in 2017, A similar incident was seen where a Saudi man forgave his son's killer just minutes before his execution. 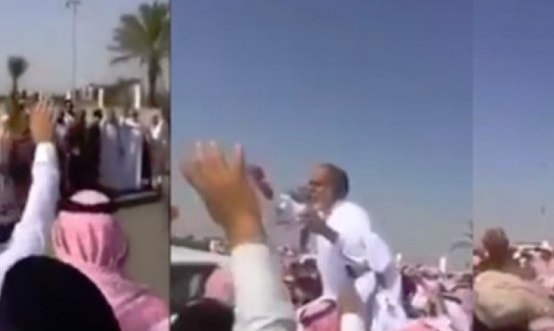