Posted by : Aahil Shaik May 30, 2018
VIDEO : A YOUNG SAUDI BOY IS DANCING IN HOSPITAL AFTER HE CAME TO KNOW NO MORE DIALYSIS SESSIONS FOR HIM

You may had seen a viral video of a Saudi young boy who is dancing next to his hospital bed, The video was taken by his doctor and it became viral in social media. Similar : Little boys friendship won the heart of social media


The reason behind the dancing of this young boy is, once he was hooked with dialysis machines due to his kidneys failure, he is dancing in celebration once he learned he had a successful kidney transplant. However it is unclear that how long the boy been undergoing dialysis treatment and who was the donor of kidney. Recommend : A Saudi teacher in investigation after he tells no more jobs for them

- In the viral video, Saudi boy wearing a face mask and dancing inside a hospital room, The video was posted by the Saudi Ministry of Health on its twitter account. The video has gained attraction not only from Saudi Arabia but also from other Arab countries.


- The boy in the video is Saif, who is rejoicing after his doctor told him that his kidney transplant was a complete success and he would not need any other procedures. The doctor voice is also heard in the background of this clip. See Also : A heartwarming story of a young Saudi boy

- According to Ministry of Health tweet, "With innocence and happiness, the boy Saif asked his doctor to spread his video for more and more likes". The words were expressed from the boy's heart, after he realized that there will be no more sessions and that his kidney transplant has been a success".


- As per the Gulf news report, The surgery took place in King Fahad Specialist Hospital in Dammam, Ministry thanked doctor Mohammad Salah and doctor Mahmoud Obeid for their excellent job. Read : NASA response to a 9 year old boy on his job application 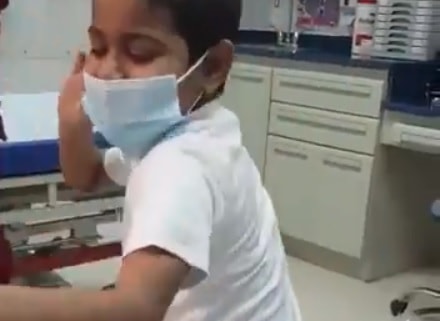