Riyadh experienced its first coldest Friday of the current season as the temperature reached below zero degree, Snowfalls are also seen in the various northern cities of the Kingdom of Saudi Arabia. Trending : Penalties on companies for iqama violations


Civil and Health Authorities of various cities sent messages to the residents asking to take precautions against cold and flu. The northern cities of Saudi Arabia recording sub zero temperatures with strong winds and snowfalls as per the weather forecasts. Recommend : No more expiry date on iqama

- Due to strong winds on Thursday night most of the people remained in their homes those who came outside was fully covered, The temperature was 7 degree in Riyadh for the Friday prayer at 12 pm.

- Visitors of Janardiyah festival in Riyadh returning home early as the weather is cold. General Presidency of Meteorology and Environment (PME) has predicted the weather with a cold spell and low visibility and the winds will speed 50km per hour. See Also : Expats Remittance tax proposal rejected 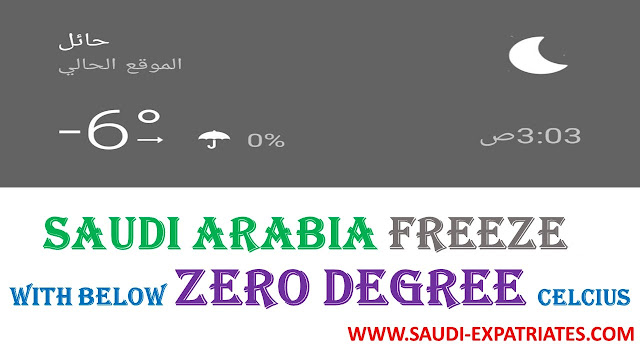 - The minimum temperature in Riyadh on Friday was -2 degree Celsius the forecast for this week is to be 1 degree on Saturday, 5 degree on Sunday and 7 degrees on Monday. Read this : Send money to home online through enjaz