80 HAWKS FLEW ON THE WINGS OF FLIGHT

Posted by : Aahil Shaik Wednesday, February 1, 2017
WATCH : 80 FALCONS FLEW WITH PRINCE ON THE WINGS OF FLIGHT
80 Falcons flew on the wings of the flight instead of their own wings, As one of the prince of Saudi Arabia bought tickets for them to fly with him. Trending : No more Expiry date on Iqama's

The pictures and videos gone viral like a fire, As one of the flight captain sent the picture to his friend and his friend posted on social media with a status "My captain friend sent me this photo, Saudi prince bought tickets for 80 hawks". Most Viewed : Wolf attacked kid in Saudi Shopping mall
- As seen in the picture, All the falcons seems to be blind folded and tied securely with the seats as they paid for it, Cabin crew is staring from far without puzzling with them. Hot : Send money to home online

- It seems, the tickets have been booked with Qatar Airways or Etihad flight. But the social media people raised questions on the airways, As the Qatar Airways and few other airlines allow only six hawks or falcons to be brought for fly on economy class. Recommend : Holidays in Saudi Arabia for 2017 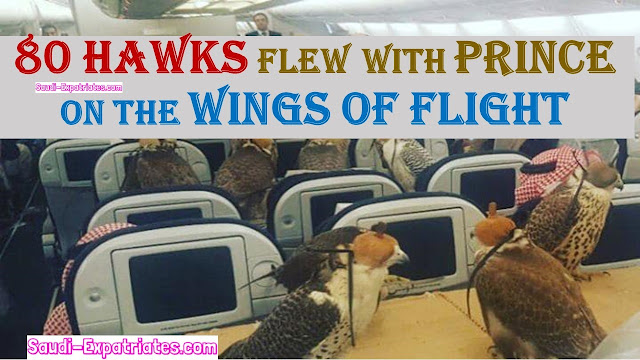 - Transportation of Hawks or Falcons is a rare practice in the Middle East countires, Falcon is a national bird of United Arab Emirates (UAE), They have their own forest green passports for flying into the UAE and other countries like Saudi Arabia, Kuwait, Bahrain, Qatar, Oman, Morocco, Syria and Pakistan. See Also : Saudi Tax first time in the history