Posted by : Aahil Shaik Saturday, October 29, 2016
MUSLIMS ALL OVER THE WORLD CONDEMNED THE ACT OF HOUTHI'S FOR ATTACKING MAKKAH

Houthi Militias act of launching missile towards Makkah is not only attack on Saudi Arabia, Its a attack on one billion Muslims all over the world. Muslims worldwide are angered for this criminal act.


- Bangladesh is sending its troops to protect the holiest cities of Makkah and Madina in Saudi Arabia as per the statement of Bangladeshi Ambassador. Bangladesh is one of the partner in Arab Coalition Forces led by Saudi Arabia.

- Muslims pilgrims from all over the world visits the holy cities of the earth Makkah and Madina to perform Umrah and Hajj, Its a attack on the worldwide Muslims.


- Alhamdulillah and thanks to the Arab coalition forces who made this criminal act unsuccessful by destructing the missile towards Makkah city. 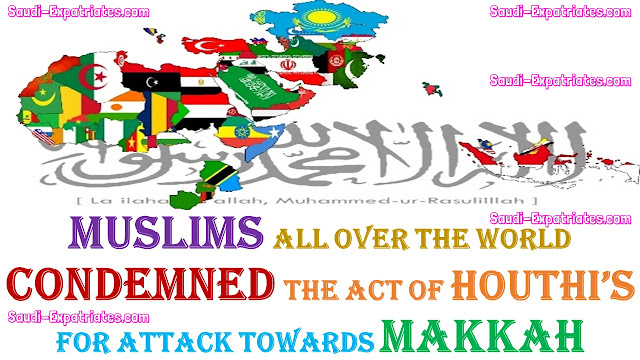