Based on the decision of Ministry Of Finance and Ministry Of Economy and Planning, The cabinet  and the Council of Ministers, revised the penalties of traffic violation (added new amendments), which is going to effect from the new Hijri year (01-01-1438) that is October 2, of the year 2016.  Next : Revised Visa Fee Scale

- Added new amendment in Article 68, Accidents involved drivers should stop the vehicle at the scene and should inform to the concern department, He also have to provide the possible help to the injured in the accident, If he fails to do so, A fine of maximum SR 10,000/- or imprisoned for a term not more than 3 months or both. Recommended : Check Traffic fines online

- New amendment is added in Article 69, Stunt driving is a traffic violence, Violator will be penalized with SR 20,000/- including seize of vehicle for 15 days. Similar : Drivers License 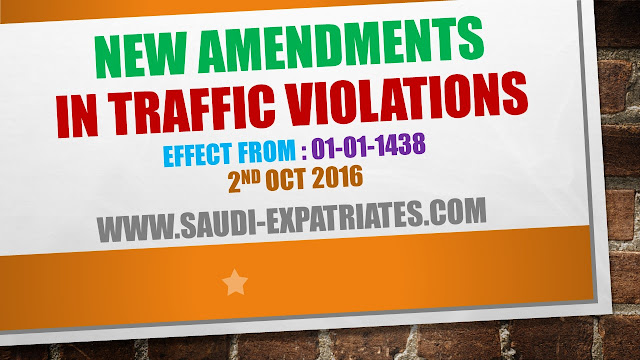 - For third violation, He must pay a fine of SR 60,000/- With a seize of vehicle. Violator will be present to the court in all the above cases. If the vehicle is stolen or rented one, Their will be no seize of the vehicle. See Also : Renew Driving License


- Article 70 New amendment, Any one who seizes the driving license or istimara of other people or gives it to mortgage will face a fine minimum SR 1000/- or a maximum of SR 2000/-. You May Like : Driving Using Mobile Phone