Saudi Arabia's King Salman ordered to resolve the issues of unpaid workers, To fulfill this order, An amount of 100 million Saudi riyals is to be deposit in Saudi Arab fund account. Necessary steps would be taken to stop the repetition of such incidents in the future of the Kingdom.


Government will not issue payments to the contracted companies till they resolve their employees unpaid dues. Thousands of complaints are registered from Saudi Oger workers and other companies employees, that they are not getting their salaries from the past nine months.


Ministry's inspection team found that Saudi Oger and other companies violated its employees contracts by not providing them health insurances, food and maintaining of accommodation. As per the order of King Salman, Ministry will take following measures of distress workers whose companies failed to address their issues. Related : Saudi Sponsor Details

Free Services to workers and Due to the company : 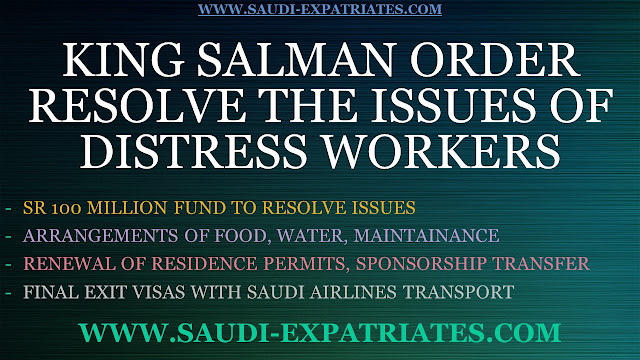 - Supply of food and drinking water to the workers, Maintenance and cleaning of their accommodation, Free medical services at their camps.


- Renewal of residence permits would be done for those who want to stay in the company. See Also : Renew Iqama Saudi Arabia

- Transfer of sponsorships without any fee with the help of concerned embassies. Recommended : Transfer Iqama Sponsorship without kafeel

- Issuance of final exit visas and free transportation service from Saudia Airlines to their home country for those who wish to leave the kingdom with the help of concerned embassies. Similar : How to check final exit in Saudi Arabia

All the above services will be offered freely to the distress workers, later Finance ministry will deduct it from the floundering companies accounts as dues. You May Also Like : Claim Compensation
Share This