According to the regulations announced by the Saudi Ministry last year, An employer or sponsor should not keep the passport of his employees or workers, Those who keeps the passports of their employees without written letter from them will be penalized or fined with Saudi Riyal 2000/-. This news was earlier published in Saudi Gazette and various news channels.


- As per the Ministry of Labor last year new regulations, An employer or sponsor who does not provide a contract copy to its employees or workers will be penalized or fined with Saudi Riyal 5000/-. Recommended : New Saudi Arabia Labor Law


- If an employer force his employee to work another job which was not specified in his contract will be fine him with Saudi Riyal 15000/-. Next : Transfer Iqama without kafeel

- In the same way if an employer asks his workers to pay the expenses which employer has to bear will also penalize him with SR 15000/-.


Similarly there will be a specific fine for companies on below violations, 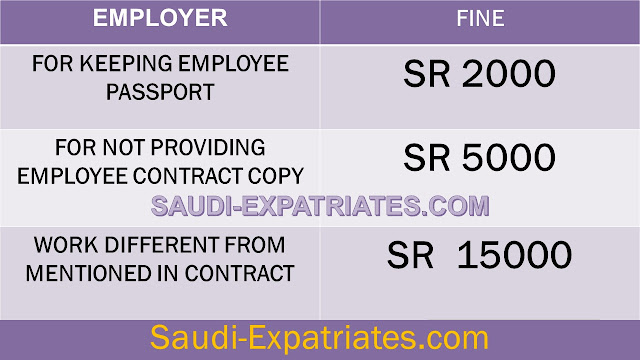 - If a firm delay the salaries of employees or if they failed to pay on time, they will be fined with SR 3000/-. Related : Salary Delay will penalize company in Saudi Arabia

- If a company force its employees to work during official weekends or holidays without pay. See Also : Public Holidays in Saudi Arabia