Saudi Customs thwarted an attempt to smuggle 3,612 bottles of liquor that were hidden in a technical way in iron pipes of a shipment received to the Kingdom through the port of Jeddah, as per the report of Al-Ekhabariya channel. Saudi Expatriates is in app now on Play Store

The Zakat, Tax and Customs Authority (ZATCA) in Saudi Arabia said the illegal goods had been seized in a shipment of iron pipes at the Red Sea Jeddah port.
- The ZATCA added that, when the shipment went through security technical inspection, the quantity of alcohol was found in detailed pack into the pipes. Trending : An expat rescued, two days after being stranded in desert
- The Authority in coordination with the police arrested two people, who were on hand to take delivery of the shipment.

- The Saudi Customs Authority confirmed that it is continuing to tighten customs control over imports and exports from and to Saudi Arabia, and is working to combat smuggling in all of its forms and types, in order to achieve one of its most important tasks and foundations, by contributing to the security and protection of society.
- Earlier this month, The Zakat Tax and Customs Authority announced thwarted an attempt to smuggle 2.3 million captagon pills at the border crossing into the Kingdom. Which was hidden inside a truck coming to Saudi Arabia at Al Hadaitha crossing in northern part of the Kingdom. Recommend : Traffic fine for crossing valleys and reefs during their flow 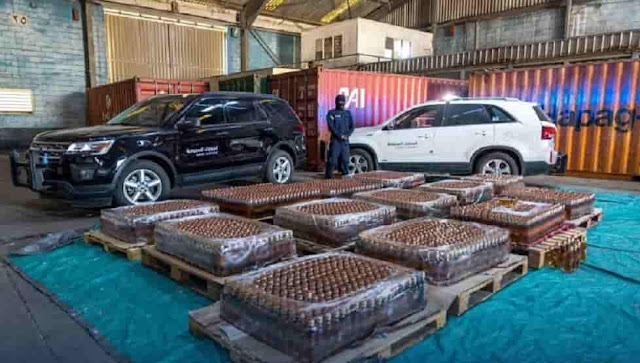