The official spokesperson for the Ministry of Defense in Saudi Arabia, Brigadier General Turki Al-Maliki, announced that the Saudi Air Defenses intercepted and destroyed 3 ballistic missiles and 3 booby-trapped drones launched by the Houthi militia towards the Eastern Province, Jizan, and Najran.

He explained that the Saudi defenses intercepted and destroyed at 9:32 PM on 4th September (Saturday) a ballistic missile launched by Houthi militia from Sanaa (Yemen) using civilian objects towards the eastern region of the Kingdom.
- According to residents of King Fahd Suburb neighborhood heard an explosion at around 9:30 PM on Saturday. The coalition announced the interception and thwarting of a hostile ballistic attack towards Eastern province in the Kingdom. Trending : Saudi Arabia ranks 2nd in world in Digital competitiveness for the year 2021
- Brigadier Al-Maliki stated that the interception process caused shrapnel to scatter over the neighborhood (Dammam Suburb), as a result of which a Saudi boy and girl were injured, and 14 residential houses were lightly damaged.
- Meanwhile, sources informed that Aramco facilities were not affected by the ballistic missile attack that targeted the Eastern region of the Kingdom.
- On Saturday early morning, Arab Coalition announced the interception and destruction of a booby-trapped drone launched by Houthi Militia towards Khamis Mushait. At 7PM air defenses of the Kingdom intercepted and destroyed 3 booby-trapped drones heading towards Kingdom. Recommend : Saudi Moroor clarifies on fees of Driving license, transportation license and changing number plate
- A few moments after the previous attack, the Coalition to Support Legitimacy announced that the Saudi defenses had intercepted a ballistic missile that was launched towards Najran, as well as another ballistic missile that was launched towards Jazan.
- Al-Maliki added that this barbaric and irresponsible behavior by the Houthi militia in attempting to target civilians and civilian objects is incompatible with heavenly values and humanitarian principles.
- He highlighted that the Ministry of Defense will take the necessary and deterrent measures to protect its lands and capabilities to stop such hostile and cross-border attacks to protect civilians and civilian objects, in accordance with international humanitarian law and its customary rules. Follow Saudi Expatriates on Google News 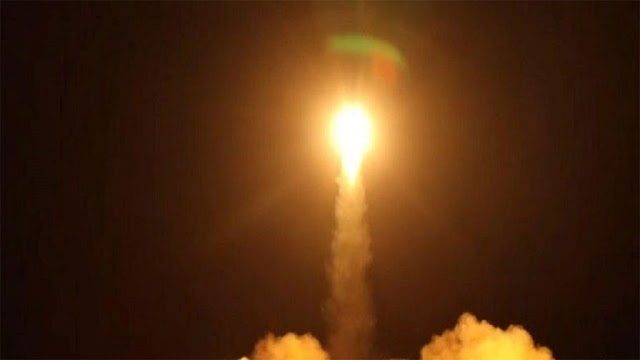