Saudi Arabia has released 63 Pakistani nationals who had been in the jails of Saudi Arabia for petty crimes on the occasion of Eid Al-Adha and as goodwill gesture of the Kingdom. Follow Saudi Expatriates on Google News

The Saudi Arabia's King Salman bin Abdulaziz ordered to release the 63 Pakistani prisoners on a special request from Pakistan's Prime Minister Imran Khan.
- Pakistan's Minister of Foreign Affairs, Ministry of Overseas Pakistanis and Pakistani Consulates arranged the return of released nationals to the Pakistan, and they reached safely at Islamabad International Airport on Tuesday on a special flight. Trending : Ban for unvaccinated people from entering into commercial centers, shopping malls, barber shops in Saudi Arabia from 1st August
- Released Pakistanis chanted 'Pakistan Zindabad' and 'Imran Khan Zindabad' slogans upon their arrival to Pakisian, they also thanked to the both governments of Kingdom and Pakistan for its remarkable efforts in this regard. 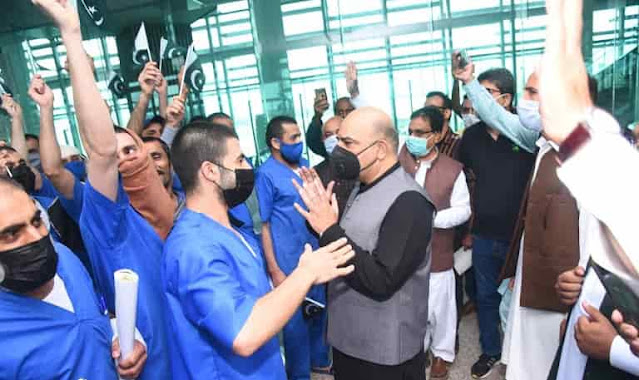