MAN PARTIALLY BURNED AFTER TRYING TO BURN OTHERS CAR

Posted by : Aahil Shaik Wednesday, August 1, 2018
MAN PARTIALLY BURNED AFTER HE TRIES TO BURN A CAR OF ANOTHER

In a viral video of the social media, A young man is trying to burn a car in the Kingdom of Saudi Arabia, Later what happened is the perfect example of how "As you sow, So shall you reap". Read : House contract must be updated in Ejar for work permits renewal or issuance


According to viral video clip, An unknown young man is seen coming out of the car and trying to lit another person's car, which is belonging of a Saudi guy as per the local reports. Recommend : A Saudi man offered free hot drinks and cold drinks on Tabuk road and requested this

- Accidentally, he partially fired himself while doing this act. In the video, the man can be seen panicking after the partial fire caught him, then he drive away in his car.


- As per the local news report, The Incident took place in Al Khalidiya in Dammam city of Saudi Arabia. The man had been identified from CCTV footage, he is 20 year old citizen and found in hospital as he has burns while executing his crime. See Also : Passport department service charges fee

- He had committed similar criminal acts of setting fire on property earlier also on his mother and uncle's vehicles.


- The owner of the burned car said, The car was burnt near to my house and the car belongs to me, It was driven by my driver. I got to know about the young man and his car. You May Also Like : Ministry of Labor resumes modification in iqama professions 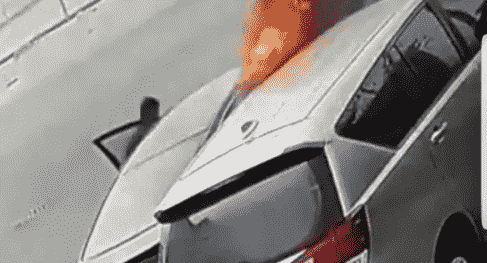