With the recent changes brought about in the Kingdom of Saudi Arabia and large-scale fluctuations in the employment sector have caused a major mayhem in the lives of millions of expats in the Kingdom, many of whom are left with no choice but to return to their respective home countries. Trending : King Fahad Causeway records highest number of passengers in a day


With the high number of people going back, getting a Police Clearance Certificate for their stay in the Kingdom is of significance before they leave the Kingdom of Saudi Arabia for good.

- A Police Clearance Certificate (PCC) is an official document which is issued after a background check by the police or government agency of a country to specify any criminal records that the applicant may/may not have during his/her stay in the country. Recommend : Saudi woman and Bahraini woman can travel through King Fahad Causeway without Mahram

- PCC is one of the important document which is usually ignored as it is not known by many. This certificate is advisable to be taken by the Expatriates who are on the verge of leaving Saudi Arabia on Final Exit. It is a compulsory document for those who are willing to settle in any other country than their home country especially those who intend to migrate to western countries as this document will be asked during the visa application process.


It is also advisable even for those people who are leaving on Final Exit but do not have immediate plans to immigrate to any other country. Because once they leave, getting PCC for their stay in Saudi Arabia is an extremely costly and a lengthy process too.


Consulate of India – Jeddah have outsourced their form submissions to VFS Global Center at the following address:
https://goo.gl/maps/zTPj77MNdtE2

a. Once at VFS Global Center, you need to fill two different forms namely “Form-2” & “Personal Particulars Form
The forms can be downloaded from the following links:
Form-2: http://www.cgijeddah.com/passport/forms/FORM-2.pdf
Personal Particulars Form - http://cgijeddah.mkcl.org/WebFiles/PP%20form%20new.pdf
Procedure on how to fill the form is explained in the following images: 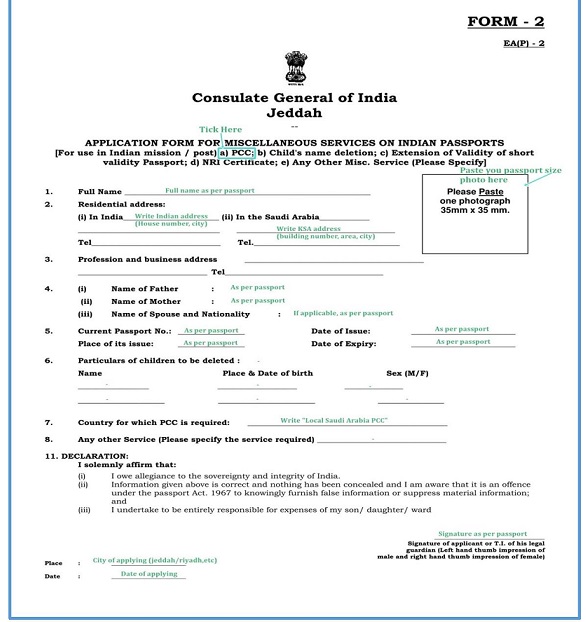