An Egyptian 12 year old boy, Al Sayed Ahmed AlSayed was found hanged in his room in his grand father home in Mahala, Egypt. "Blue Whale" app, a deadly cyber game was found on his smartphone. Trending :  Indian dies after bitten by poisonous ant in Riyadh


As per the security services investigation, the child was in a severe psychological crisis, as his parents separated and remarried with others, So he came to live with his grandfather in a village of Al Karma. Recommend : Expat kids to say Goodbye to Saudi Arabia

- The investigation also revealed that the boy was isolated himself in his room from the last few days and the family believed it was because of his sadness. The public prosecution decided to authorize the burial of the body and ordered for investigations to know the circumstances behind the death of the boy.


- Parents should be more responsible and should monitor their kids if they have started avoiding family and friends or if they are unhappy or in bad mood or getting irritated or showing sudden anger or have lost interest on their favorite activities or facing problems while eating or sleeping, etc,. Most Viewed : Little boy letter to his dead mother made everyone emotional

- Egypt recorded 4 cases of suicide in the last few days because of this deadly cyber game blue whale. One was the son of parliamentarian , second one in Alexandria, where blue whale mark was found on a girl leg, third one in Sharqia where he drowned because of following instructions mentioned in the game.

- The house of representative is working on adding the game as part of cyber crimes in order to protect Egyptian national security and the lives of innocent kids, who are curious to dare and end up losing their lives. Read : Biometric finger prints must for expat and kids above 6 years

- As per the draft law of 45 articles and 4 sections, All dangerous games will be added to the crimes and stipulated in the law. Where violators will get the huge penalties and imprisonment, violation will be recorded whether you play game or those who allow to play the game via electronic applications of Egypt. 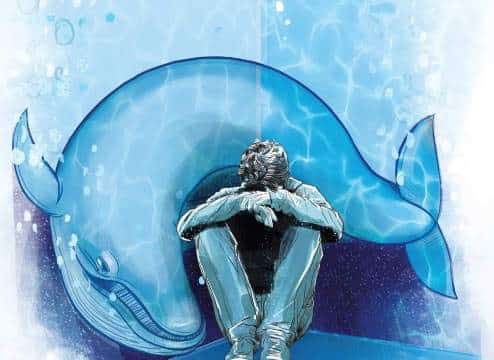