Riyadh police have arrested a Saudi citizen, who recorded a video of a child firing a machine gun, encouraging him to tamper with weapons and firing live bullets in a residential neighborhood in the east of the capital city of Riyadh in Saudi Arabia. Trending : Huroob on domestic workers can be reported through Absher now

The media spokesman of the region's police stated that with reference to the video clip in this regard, and to the seriousness of it and its negative effects on the behavior of the child and his view. The district police authority was able to analyse the section and take all necessary action on it. Most Viewed : Saudi Arabia holds record for world's longest straight road

- He added that the identity of the tampered person who recorded the video had been revealed and arrested and found to be a citizen who is in 20's, indicating that he had been suspended and that the Public Prosecution branch had been notified of the area to take the necessary action according to the jurisdiction.


- The Riyadh police in their declaration, warns against the consequences of tampering with weapons and the resulting dangers and stresses, the need to raise the awareness of young people about their use and to make habit of the values of respect for the regulations and laws, in order to preserve their safety and the safety of the society. See Also : Luxury features in new Saptco buses 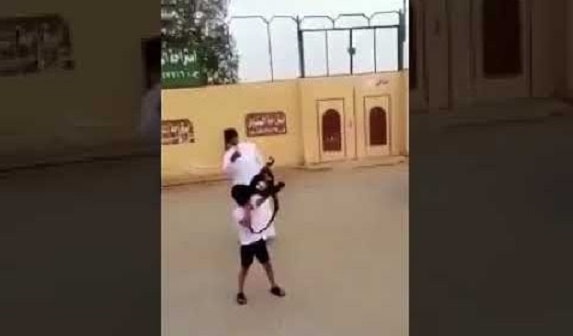