A SAUDI TEACHER IN INVESTIGATION FOR TELLING STUDENTS

Posted by : Aahil Shaik Wednesday, October 18, 2017
A SAUDI TEACHER IS IN TRACE AFTER HE TELLS HIS YOUNG STUDENTS THEY WILL NEVER FIND JOBS

A Saudi teacher in the Kingdom is in trace and in investigation after a video of 11 seconds became viral in social media, In the footage, a teacher is heard saying to his young students that they will never find jobs even they study hard or not. Trending : An Emotional letter from boy to Dead mother


The viral video of a young teacher saying his students "No matter what ever you do, there are no jobs" irked many people in social video at last the video ends with "If you want to suspend me, go ahead and do it". Most Viewed : Expat won 4 years of residence permit for free

- The Ministry of Education is investigating on the matter, Ministry spokesman said officials believe the man in the video cannot be a teacher, they are trying to find out from which place and when this video is taken.

- Social media users reacting very fast on this short video clip, Most of them are completely against the statements said by a teacher while others reacts its a truth. See Also : Verdict of Saudi court on Cat Killer


- One of the twitter user name Alma Mt tweeted, "What a painful video, Even it is truth, They are too young to understand his speech", While the other user Sultan AlSaif said, "The man clearly does not believe in education, how is he even able to do his job". Related : HIV test mandatory for iqama renewal for these countries expats

- Few tried to link it with statistics saying "What he said is true, there are no job opportunities open to our youth and statistics confirm that 500,000 university graduates are currently unemployed". 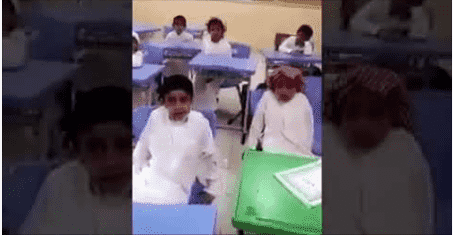