A Saudi man was praised for his quick action to prevent possible disaster at one of the petrol station in Saudi Arabia, Up to 50 people and property saved from his heroic action in Riyadh.


A video becoming viral in social media, The video clip footage shows a vehicle in flames near to the petrol pump and some people unsure what to do, Then suddenly a Saudi man enter with his car and ram the burning car away from the petrol station, before any further damage.

- The driver then reverses his vehicle away from the place with burning tyres of his own vehicle and then he went away to cool down his own car tyres, As per the sources the Saudi man was Sultan Bin Mohammad Al Rajban.


- On asking Sultan, He said he was coming out of the mosque after his Magrib prayer, then he saw a large crowd dealing with a burning car near to the petrol station and a ATM machine.

- I felt strong and tried to make the scene safe for everyone out their and pushed burning car from my vehicle before any tragedy happens. My car was slightly damaged, This does not matter to me, I did my duty towards my country and the innocent people around there.

- People in social media are demanding to reward the man for his bravery, few of them suggested petrol pump owner to provide the man free petrol for a year. 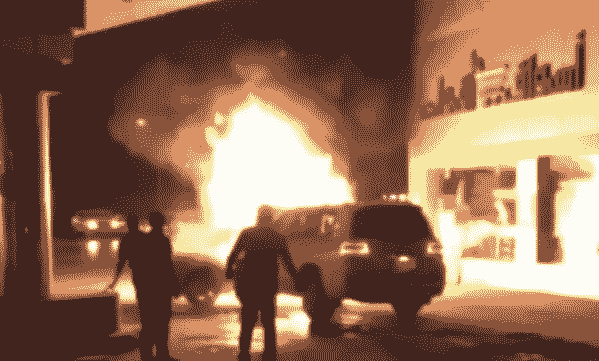