90 DAYS LIMIT FOR VIOLATORS IN KSA

Within few days of amnesty period in Saudi Arabia, Thousands of illegal expatriates left Kingdom and taking a sigh of relief in their homes. It is expected to reach one million illegal expatriates till July 24th in the running campaign of "Nation free of violators". Trending : Campaign is extended for one more month


The national campaign to pursue and detain the violators of the labor, iqama and border security laws (A nation without illegal violators).

- 90 days is the time limit for the violators to leave the Kingdom on his own and at his own expenses, starting from 29th March 2017 (Wednesday).

Who would benefit from this 90 days amnesty period :

1. Those who entered the Kingdom of Saudi Arabia illegally.


2. Those expatriates who came into the Kingdom with work visa and did not got their resident identity or iqama within 90 days of the arrival date.

4. Those expats who have been reported as Huroob or Absent From Work before the the beginning of amnesty period. 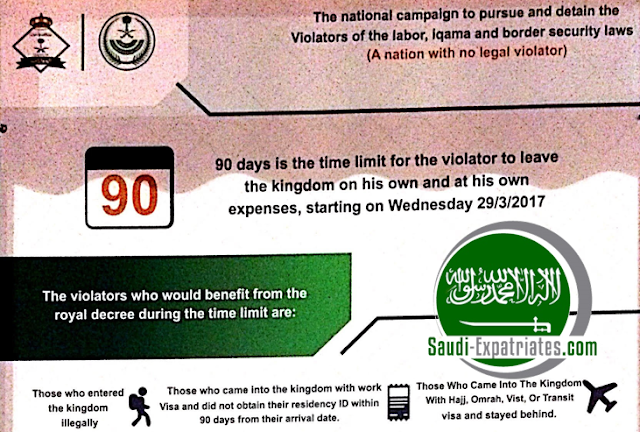 5. Those all expatriates who did Hajj illegally without legal permit or tasreeh.


6. Expats whose resident identity (Iqama or Muqeem) are expired and not renewed.


Benefits to the illegals who leave Kingdom on their own during the amnesty :

- Will be exempted from all fees and penalties for violating labor, iqama and border security laws.

- Will be exempted from "Deported Finger Print", Which will allow them to enter the Kingdom again in a legal way. 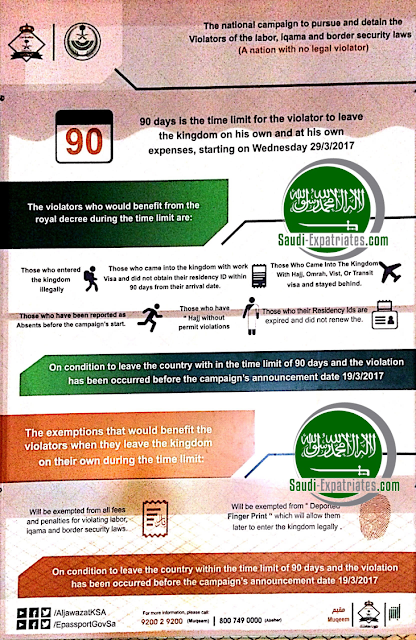