Illegal expatriates who failed to leave Saudi Arabia in the 120 days of amnesty period will face heavy penalties ranging in between 10,000 Saudi Riyals to 50,000 Saudi Arabian Riyals including 6 months jail term as per the statement of Passport Department head. Trending : Amnesty period for illegals in Saudi Arabia 2017

- The chance of four months amnesty period has ended and will not not come again and again, Illegal expatriates and violators who took advantage of it before July 24 are the lucky, As their illegal status is rectified and cleared heavy penalties on them. Related : Nation free of violators campaign


- This "Nation free of violators" campaign, which was started from March 29 (Wednesday) allowed expatriates who overstayed on Visit Visas, Transit Visas, Hajj Visas, Umrah Visas and those ones who entered KSA in a illegal way. Recommend : Investors can become self sponsors


- Undocumented illegal expatriates, Work visa violators with Iqama expiry and run away expats who are reported as huroob  also got benefited in this period, Most of the Embassies and consulates helped their illegal people, So that they can go home by following the simple procedure. Similar : Raids on illegal businesses in Riyadh

- As per the statistics of General Authority, There are 12 million expatriates are living in Saudi Arabia out of 32 million population and about 600,000 illegal expats benefited from the 4 months amnesty period. You May Like : Firms notices to Expats in KSA 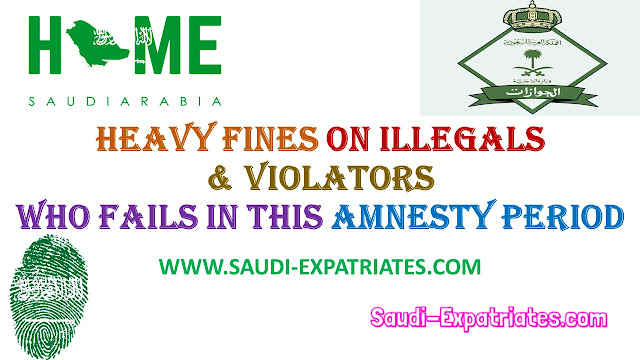