King Faisal International Prize initially was launched in the year 1979 by the King Faisal Foundation, This prestigious and glorious award recognizes the outstanding works of the people or institutions in 5 categories

- The selection committee of the prize observed that the King Salman has shown the commitment to the Life of Prophet Mohammed(PBUH).

- Supported the Historic sites of Prophet Sira(Life of Prophet Mohammed) and its Implementation by King Abdulaziz Dara (Foundation of Research and Archives).


- He also founded King Abdulaziz Complex for Endowment Libraries in Madina Munawwarah for preserving the Arabic and Islamic heritage.

- King Salman has ensured dedicated efforts to unite Arabs and Muslims in the face of difficulty challenges currently in the Arabic and Muslim world. Similar : King Salman orders resolve the issues of distress workers

- King has stood for steady Arabic and support on the Palestinian issue and offered several remarkable services to the needy in several Arab and Muslim countries.

- Professor Laurens Molenkamp, Netherlands and Professor Daniel Loss, Switzerland bags the award in the category of "Science" for the year 2017. Most Viewed : Saudi nurse sets an example of humanity 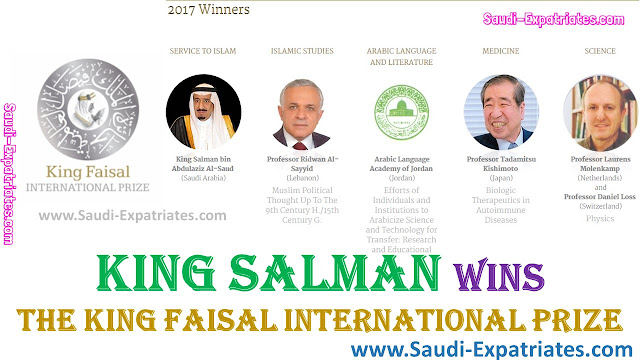