NO MORE EXPATS IN TELECOM FROM SEPT 2

Posted by : Aahil Shaik Tuesday, September 6, 2016
EXPATS SHOULD NOT BE IN MOBILE SHOPS FROM 2ND SEPTEMBER

Earlier this year the ministry of Labor and Social Development of Saudi made a new rule to replace expat labor force in the telecom industry with Saudi nationals. The secretary made clear the motive behind this decision is, to improve job opportunities for the Saudis and to invite younger generation onto the field of technology.  This decision is believed to impart progress on the national growth and technical efficacy of the country.


It is ordered to replace 50% of the workforce with Saudis by June 6 of 2016 and within September 2, the entire telecom industry must be nationalized. The state has given 6 months for the companies to correct their workforce status and the ministry is very strict in this amendment after the announcement has made public. Recommended : Expatriates can get treatment in Saudi Government hospitals

This new decision was inserted as article 36 of Saudi labor Law. According to which any violation of this law will result in a strict penalty and shutdown procedure. The present penalty is decided to be SR 20000, which might be later revised.


- The office of ministry had done a field visit in order to check their first benchmark. Till now around 1700 shops in various parts of Saudi were forced to shut down, due to the rule violation. Another 1000 shops were given a last warning before the penalty. Similar : No Big vehicles allowed for small expat families


- As the deadline is ended, MOL gives a toll free number 19911 and a website rasd.ma3an.gov.sa to report mobile shop violations in the Kingdom of Saudi Arabia. 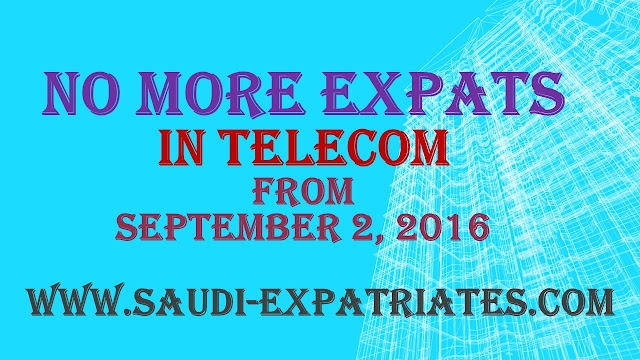 - The ministry informed a field visit of over 20000 companies and shops dealing with telecom products and services. Also, they have ordered to maintain separate departments for sales, services, and accessories with all workforce's being Saudis. You May Like : Check your Health Insurance Online


- There came a mixed review for this decision, where expats became sad due to crashed job opportunities for them, where most nationals welcomed it since this created a huge opening for local Saudis. Related : Fingerprints must for Expat kids above 6 years

- The vocational training department has trained and prepared around 30000 males and females to deal the telecom industry, where each of the personnel under goes an apprenticeship for a span of over 3 months in order to ensure market competency. The replaced expats are trying the construction industry and other electronic sectors in order to meet the bread, where a minority population has returned home.


In the meanwhile, the fully operational and functional female ran mobile shop in Al Rima, East Riyadh received appreciation from all around the country. All the employees in the shop are females and the owner commented that this initiation would motivate the women to step onto the technical world and walk with the latest. See Also : Saptco Bus Service Riyadh