Saudi Binladin group and company salaries issue to be resolve soon, The major Saudi Arabian construction company which is currently in crisis and unable to pay its employees salary since few months.


As per Saudi Labor Minister, Mufarrej Al-Haqabani in Riyadh said to Euromoney Saudi Arabia Conference that, Saudi Binladin company ensured to resolve all the issues which is related to wages. Video : Binladin unpaid workers blazed buses in Kingdom


- Once Ministry of Labor in Saudi Arabia get notice of salary delays, We send our inspectors to the company. Related : Salary Delay Penalties for Firm

- Labor Ministry's 'top priority' is to make ensure that all the employees of company get salaries as in wage protection system of kingdom. Similar : Wage Protection of Saudi Arabia


- Expatriates who are facing wage problems or unpaid salaries can either stay with the company or they can transfer their sponsorship to another employer. See this : Transfer Iqama with out Kafeel

- If the unpaid employees want to go in final exit, They can assign someone who will be responsible to follow their case with the company. Read : Check Final Exit Visa Status in MOI & MOL


- Ministry Of Labor will continue this process till all the workers get paid their salaries as per wage, even after the expatriates left the country after assigning someone. Update : New updates in Saudi Arabia Labor Law

- Saudi Oger Ltd staff also facing the crisis of salary delays and It is in notice of labor ministry.


- Saudi Bin Ladin Group was suspended by government from taking new contracts after the incident of crane crash in Makkah. Video : Crane fall in Makkah 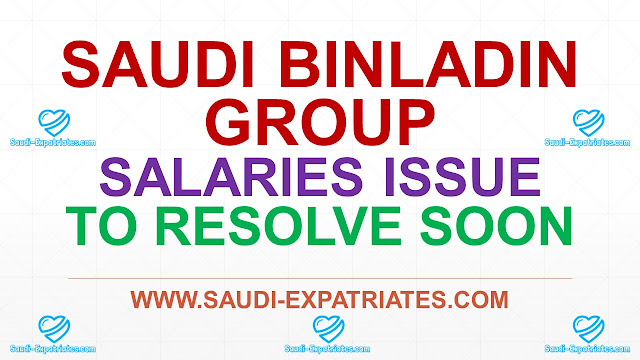 - Few companies are complaining that the financial situation is due to government delaying payments of the work already done. As per contract, A firm should pay an employee salary without delays or conditions or any reasons.
Share This